Natural disasters have long shaped our nation’s history, from the deadly Galveston hurricane of 1900 to the devastating Dust Bowl drought of the ’30s. But for evidence of jaw-dropping costs of environmental tragedies, Americans need to look no further than the 21st century. 2017 was the costliest year on record for major natural disasters; following hurricanes Harvey, Irma, and Maria and massive wildfires in California, damages amounted to $306 billion nationally. In 2005, the year Hurricane Katrina struck the Gulf Coast, damages from major disasters totaled $214 billion. We owe these figures to the NOAA’s National Centers for Environmental Information (NCEI) Billion-Dollar Weather and Climate Disasters, which estimates the comprehensive costs of major disasters. These numbers account for the largest disasters each year and diagnose repercussions for the national economy as a whole. But these billion-dollar catastrophes, while telling a macro side of the story, left us wondering about the impact these storms have on American homes and property. How much do American homes suffer each year, and how do different storms affect people’s property, regardless of storm size? To find out, we studied NOAA NCEI’s Storm Events database, which contains reports from individual storms, to better understand what destructive weather has actually cost Americans this century and how this threat varies by state. These figures were obtained from the National Weather Service, and take into account a variety of sources close to the storms, including counties, states, local law enforcement officials, news reports, and more. Keep reading to learn how our nation has paid for extreme weather in recent years, both regarding dollar totals and deaths.

To consider the financial toll of both small and large weather disturbances since 2000, we studied all disasters resulting it at least $1 million in property damage according to NOAA. In reviewing this animation, note this database’s records sometimes denote the direct cause of property damage, rather than the weather event that preceded it. In late 2012, for instance, large-scale flooding damage appeared in the Northeast—likely due to the storm surge from Hurricane Sandy. In other instances, however, the cause was recorded: Wilma’s 2005 impact on South Florida, for instance, was categorized as hurricane damage. These differences result from the broad array of sources NOAA employs to produce its database, including varied state systems, the National Weather Service, and media reports. For our purposes, however, the precise categorization of these events mattered less than their shocking volume: Since 2000, hundreds of disasters have resulted in $1 million or more in reported property damage. These events seem largely concentrated in the country’s Eastern half, but no region was left totally unscathed. On the West Coast, for example, California witnessed several massive wildfires, while Oregon and Washington suffered damage from heavy rain and flooding.

The most costly years since the turn of the century have included major hurricanes. In 2005, Hurricane Katrina pushed reported property damage above $96 billion, and 2017 surpassed $75 billion in recorded damages thanks to hurricanes Harvey, Irma, and Maria. Given these sky-high figures in some years, the vast variability of our numbers is also striking: In 2002 and 2015, for instance, less than $5 billion in damaged property was reported. This inconsistency has proved troubling for lawmakers hoping to anticipate how much natural disaster recovery funding will be needed in future years. Accordingly, some have suggested a rolling fund in which excess funding in down years could accrue for future use—although it’s difficult to imagine that system covering outlier years like 2005 and 2017. Hurricanes, tidal events, and flooding accounted for the largest portions of the more than $376 billion in property damage attributed to natural disasters since 2000. But in some specific cases, wind proved just as destructive as water. After Joplin, Missouri, suffered a massive tornado in 2011, damages stemming from this kind of disaster increased substantially. Winter storm property damage, conversely, seemed to increase modestly and predictably each year, with no particular surge at any given time. 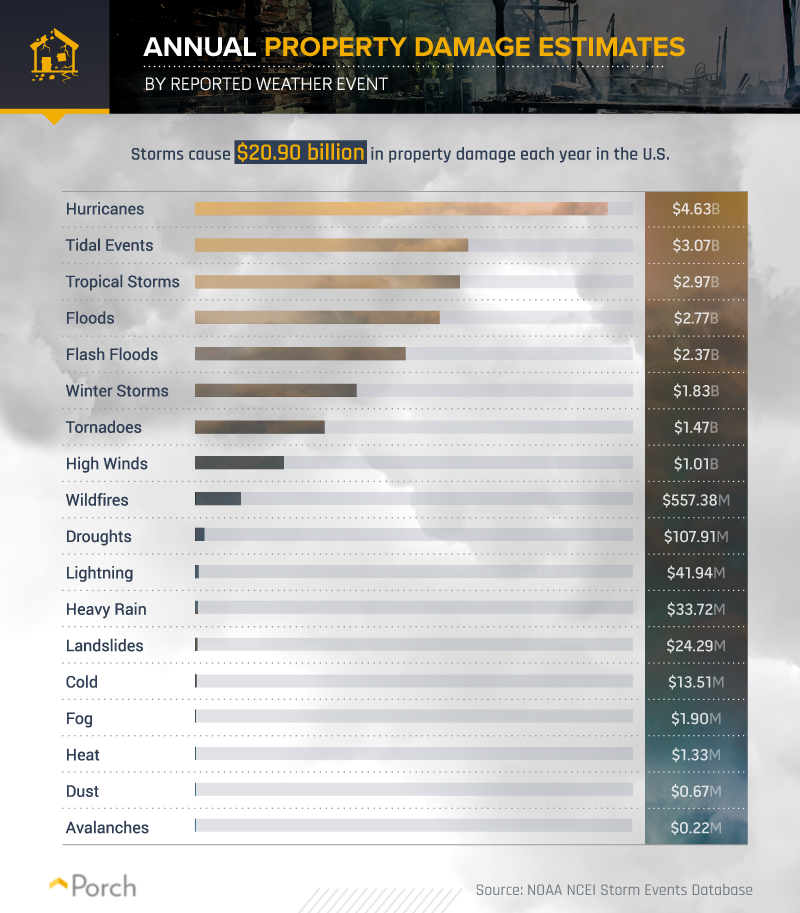 As noted above, hurricanes and related threats accounted for the greatest portion of property damage. More precisely, storms caused almost $21 billion in damage from 2000 through 2017. Many caution this financial toll will only accelerate in the years to come, as climate change exacerbates the intensity of future hurricane seasons. Similarly, some researchers suggest the frequency of tornadoes is increasing, although the connection to global warming (if any) remains unclear. Tornadoes and high winds each caused more than $1 billion in property damage from 2000 to 2017. Relative to hurricane devastation, the scale of destruction resulting from other natural disasters can seem somewhat limited. Wildfires, for instance, caused over $557 million in property damage—a tragically large number in absolute terms, but just a fraction of the destruction wrought by storms. Still, before dismissing these threats on this comparative basis, consider the damage in more human terms than massive dollar totals. In 2017, for instance, wildfires destroyed more than 1,000 structures in California, including many family homes. 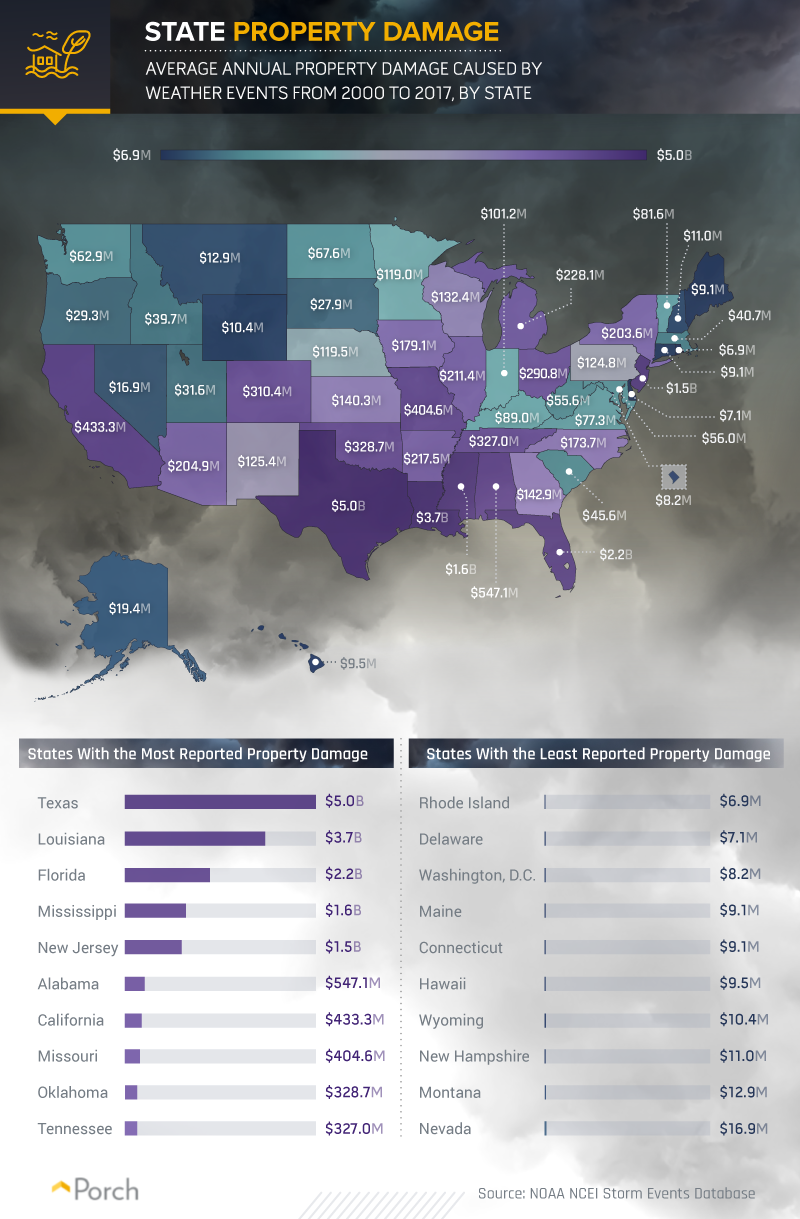 If storms drive property damage nationwide, which states are most susceptible to their ravages? According to our figures, states that border the Gulf of Mexico have endured the greatest property damage resulting from storms since 2000, with Texas, Louisiana, and Florida each averaging more than $2 billion in damages annually. Mississippi and Alabama, which boast smaller Gulf Coast borders, also ranked fourth and sixth in average damage respectively. Some have suggested the Gulf Coast’s geographical vulnerability and intensive development present a lethal combination when storms strike—a thesis supported by the devastation wrought by hurricanes Katrina and Harvey. Conversely, states along the Eastern Seaboard fared relatively well regarding storm damage, with several states averaging less than $10 million in property damage each year. Further west, landlocked Montana, Wyoming, and Nevada also sustained relatively little damage. Interestingly, Hawaii was also relatively insulated from storm damage: Since 1950, just three hurricanes have made landfall on the string of islands that compose the state. 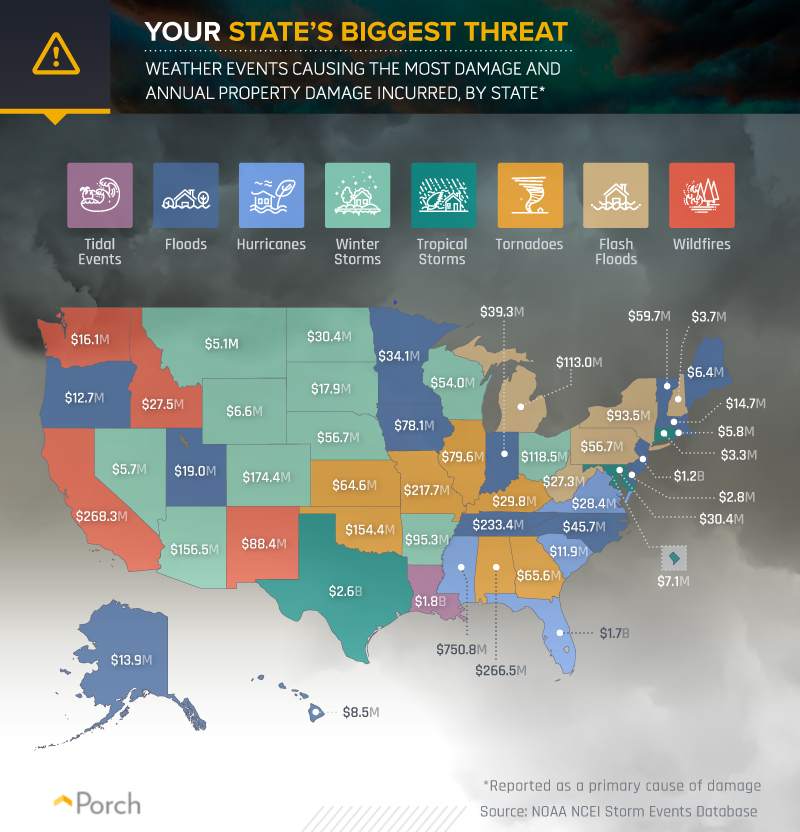 Although storms may menace some regions with a particular frequency, no state is entirely free of its own natural disaster dangers. For a Western contingent including California, Washington, Idaho, and Arizona, wildfires caused the greatest property damage. Winter storms were the largest driver of damage in many Northwestern states, including Montana, Wyoming, and the Dakotas. In parts of the American heartland, tornados were the most destructive force—including in Kansas, where “The Wizard of Oz” has memorialized their power. Other differences seem to result from categorization nuances encoded in NOAA data. In Louisiana, for example, tidal events were the leading cause of damage, although this category certainly includes the ravages of Hurricane Katrina. Similarly, the greatest risk in some Northeastern states was flash flooding, whereas other states cited floods instead. 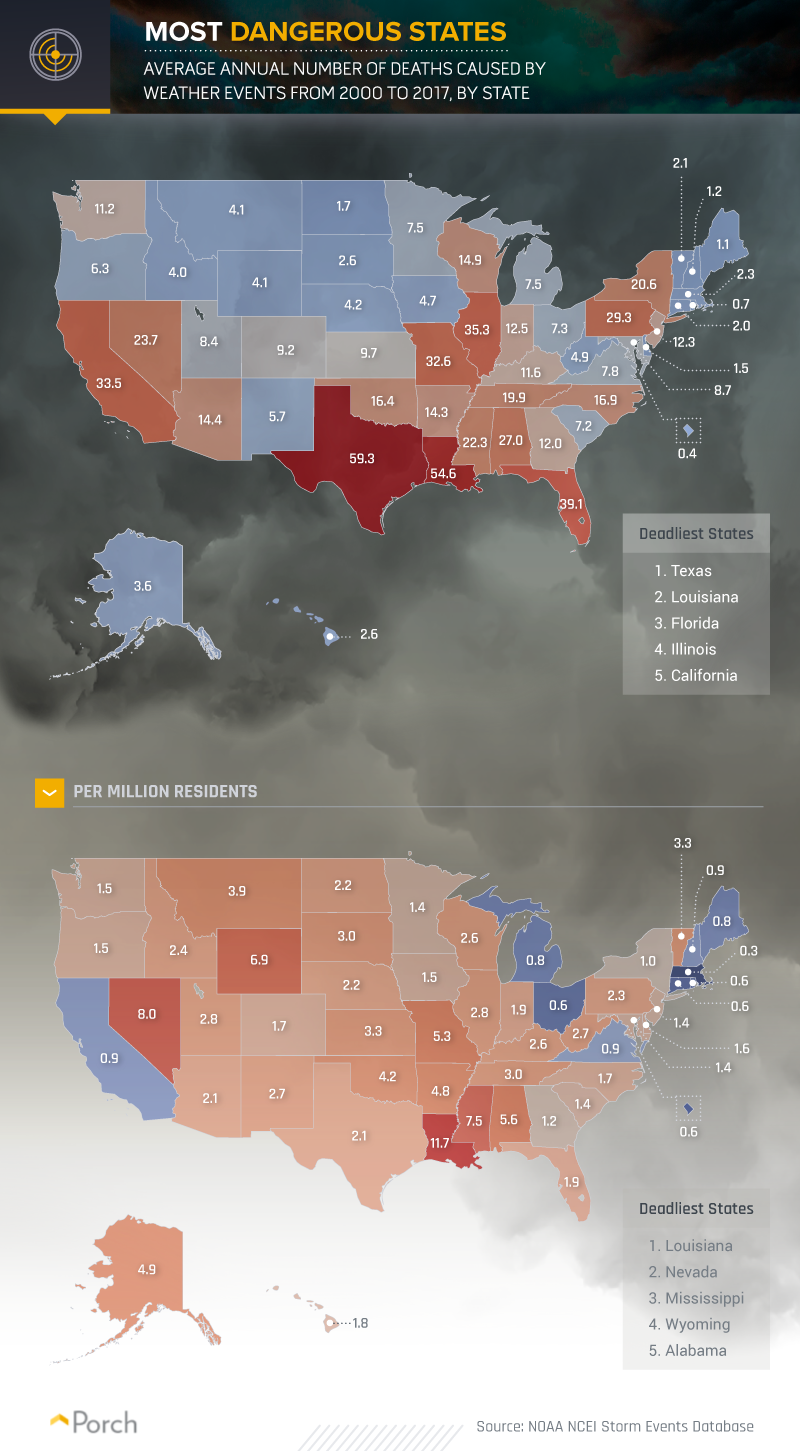 However extensive the destruction of property, no loss matters more than that of human life. In addition to financial costs associated with these natural disasters, we also studied how many people in each state passed away due to weather events since 2000. In some places, such as Texas and Louisiana, the average number of annual deaths was strikingly high. Of course, these averages reflect some singular large-scale disasters: More than 1,500 Louisianans died as a result of Hurricane Katrina, for instance. When we review deaths per capita, however, the annual averages suggest more modest degrees of danger in populous states such as Texas and California. Conversely, threats in Nevada and Wyoming seem more significant relative to their number of residents—and despite their landlocked locations. Unfortunately, however, Louisiana’s rate of deaths remains concerningly high in this per-capita view, with nearly 12 deaths a year, on average, per million residents.

Our findings indicate the frequency and severity of major weather events since the turn of the century, with no region going entirely unscathed. But if devastating weather is now a regular feature of American life, much can still be done to limit its harmful effects on families and communities. Often, we delay investing in preparation until a natural disaster threatens our homes when time and materials are in short supply. If families take a proactive approach to preparation instead, they can avert many of the financial and personal costs of extreme weather—and enjoy more peace of mind in the meantime. Whether you’re hoping to protect your home from weather threats or repair damage that’s already occurred, you’ll want competent professionals ensuring your family’s safety. Porch can connect you with qualified experts for any home improvement project, from simple fixes to structural repairs. Whatever you need to make your house feel like a home, we’ll find the right pro for you.

To compile the data used in the graphics and text for this project, we used the NOAA’s National Centers for Environmental Information (NCEI) Storm Events Database from 2000 through 2017. All data were downloaded from NOAA’s website in February 2018. For this project, we considered only the database listings with valued property damage or indirect or direct deaths caused by storms as identified in the database. In total, this included 269,000 storm events between 2000 and 2017. Each storm event is categorized into an event type, as reported by the National Weather Service. To reduce confusion, we consolidated similar entries into single entries for the purposes of grouping similar storm types (for instance, the categories “Winter Storm,” “Winter Weather,” “Blizzard,” “Marine Hail,” “Ice Storm,” “Lake Effect Snow,” “Heavy Snow,” and “Sleet” were categorized more generally as “Winter Storms”). To compile our map for the storms with more than $1 million in property damage, we pulled latitude and longitude information from the database for records which had it. For those that did not, we used county information listed and approximate latitude and longitude information using the county and state information listed. We also manually corrected some latitudinal and longitudinal coordinates that were inconsistent with the state or county information provided. The data in the database are compiled from the National Weather Service, which “receives their information from a variety of sources, which include but are not limited to: county, state and federal emergency management officials, local law enforcement officials, SKYWARN® spotters, NWS damage surveys, newspaper clipping services, the insurance industry and the general public, among others.” Because this is self-reported data and temporal, estimates may be premature or vary based on the reporting agency. The data also do not take into account other factors, like job loss, work loss, and other traditional “damage” factors, and should be regarded as conservative estimates. We have not verified or questioned the validity of reports as entered into the Storm Events Database. Please see https://www.ncdc.noaa.gov/stormevents/faq.jsp for more information about the data collection and accuracy of the data.

If you’d like to share our findings with your own audience, you’re welcome to use our information and images for noncommercial purposes. We do ask that you credit Porch appropriately by providing a link to this page. Rain or shine, we work hard to bring this content to our readers, so we truly appreciate proper attribution.