By many measures, America’s blue-collar workers are confronting a challenging present and uncertain future. The twin threats of outsourcing and automation show few signs of slowing, causing some pundits to question whether the American dream remains attainable for working-class families. However, research suggests the outlook for white-collar professionals may also be less than rosy. Whereas blue-collar workers have actually enjoyed rising wages in recent months, white-collar professionals have seen their pay remain largely stagnant. Plus, large-scale surveys indicate office workers are feeling deeply disconnected from their work, leading to burnout and poor performance. In this project, we surveyed 1,000 blue- and white-collar employees on their experiences at work and outside of it. Our results reveal the emotional impact of a shifting employment landscape and the personal costs of professional life nationwide. To find out how your own feelings compare to those of other workers, keep reading. 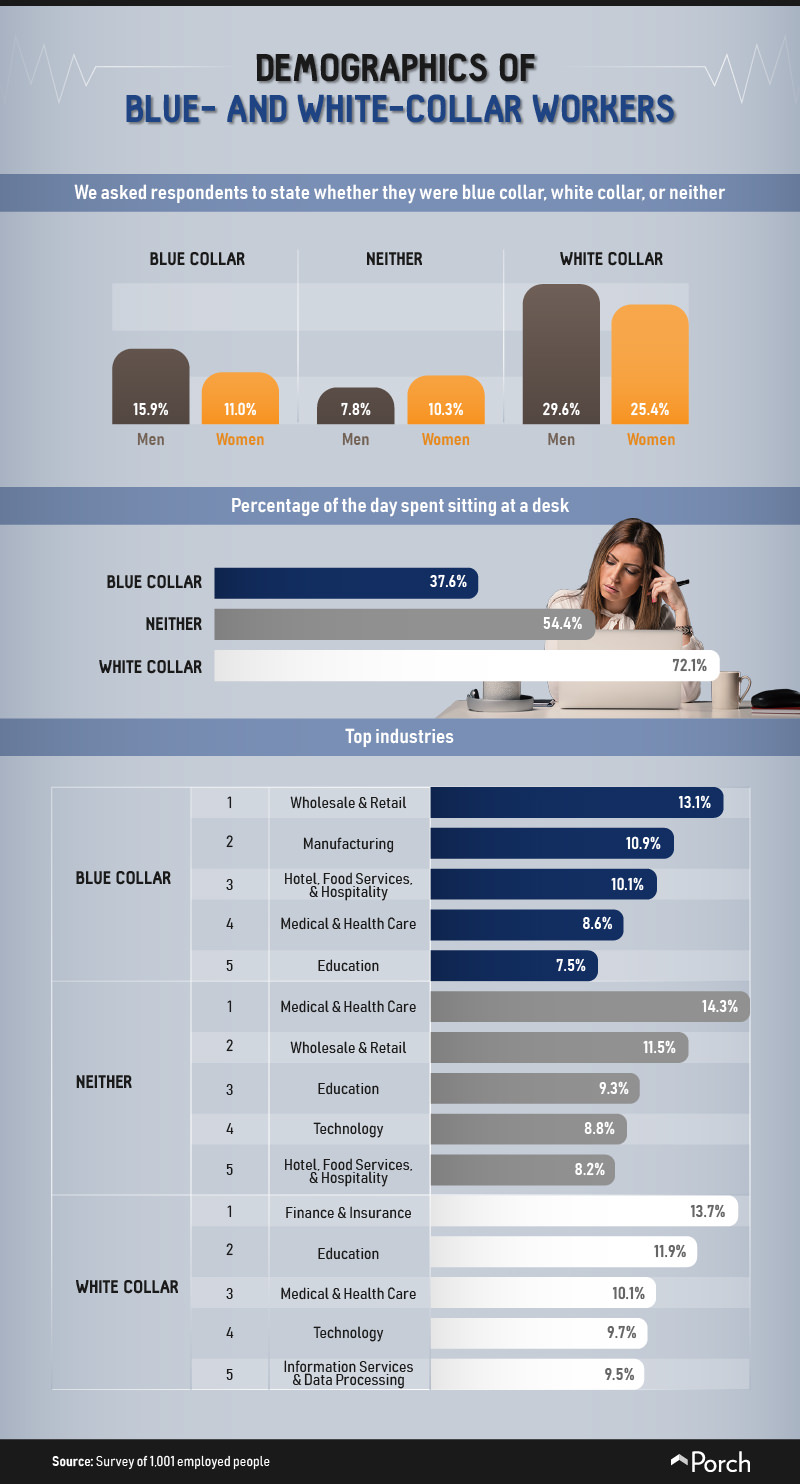 Among our respondents, a majority identified their jobs as white-collar professions. Blue-collar workers represented roughly 27 percent of those surveyed, and about 18 percent felt neither designation was appropriate. With regard to this uncertainty, it’s worth noting new technology has muddied the blue-white binary to some extent. Economists describe a recent rise in “new-collar” jobs, which demand technical training but no college degree. Our findings do suggest, however, that white-collar work remains associated with sedentary office culture. Those who deemed themselves white-collar professionals said they spent more than two-thirds of their workdays at a desk on average. Conversely, the most common industries for self-identified blue-collar workers were the wholesale and retail, manufacturing and hospitality fields—work typically performed on one’s feet.

Feelings in the field 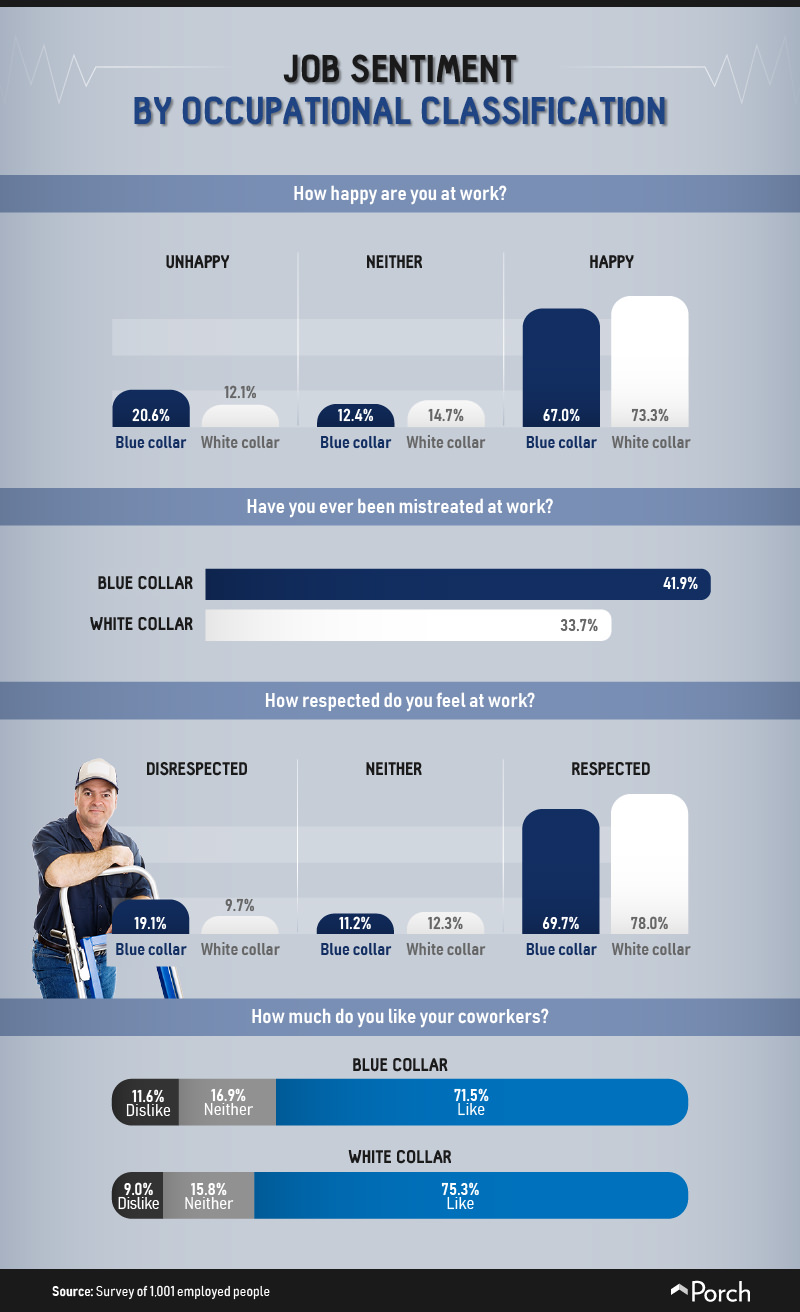 Fear of the future

White-collar workers expressed slightly more optimism about the future than respondents in blue-collar roles. That sentiment could relate to the impending onslaught of automation; white-collar professionals were much less likely to fear replacement by machines. Still, some white-collar workers acknowledged there was a chance that automation could imperil their professions, with about a third expressing some degree of fear about the prospect. Their concerns may be justified: Experts predict automation will eventually encroach on even elite professions, such as medicine and law. Interestingly, roughly the same percentage of blue- and white-collar workers felt finding another job would be easy if they lost their current one. Nearly 37 percent of blue-collar workers said it would be difficult to do so, however, whereas just 30 percent of white-collar respondents said the same. Interestingly, blue-collar workers may actually have seen their job prospects improve most in recent months. America’s recent economic good fortune has actually occasioned a boom in blue-collar jobs, especially in sectors such as construction and manufacturing. 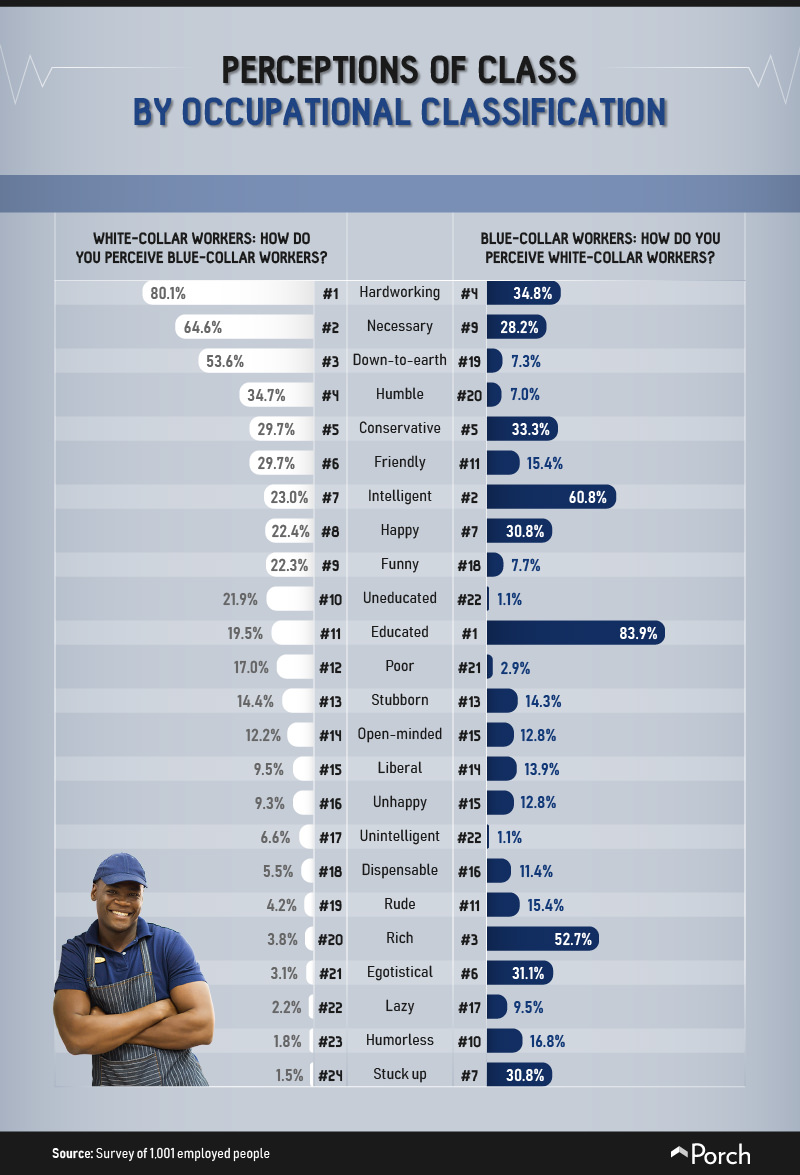 While nearly 4 in 5 white-collar workers had a bachelor’s degree, more than 40 percent of blue-collar individuals graduated from college as well. Blue-collar workers, by contrast, were more likely to hold an associate degree or have attended a trade school. Recently, policymakers have called for a resurgence of vocational schools to equip American workers to enter high-paying trades. Currently, blue-collar workers’ studies don’t often correspond to their careers: Just 36 percent said they worked in a field they had studied previously. Whatever they elected to study, blue-collar and white-collar employees paid dearly for the privilege. White-collar students had more than $20,000 in student loan debt on average, whereas blue-collar employees had a bit less. Unfortunately, even vocationally oriented schooling can leave students in crippling debt: Trucking school, for example, routinely costs thousands of dollars to attend. 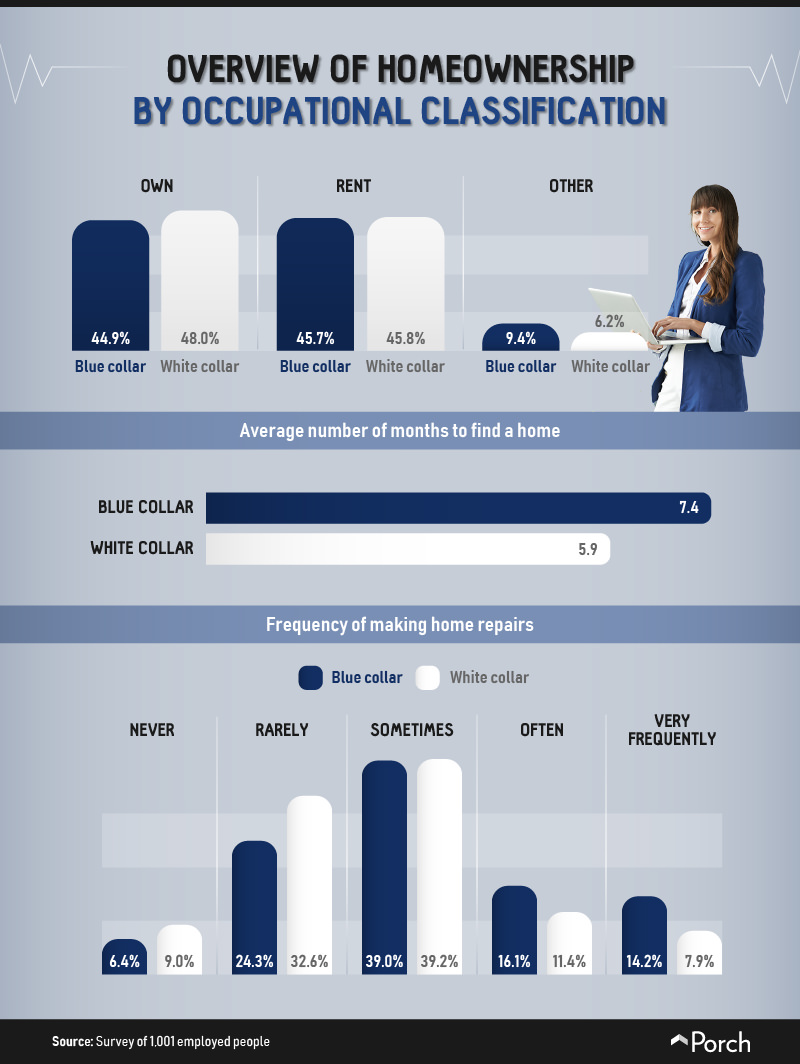 What you do—and what you don’t have to

Our results suggest many workers feel great strain related to their employment, both in terms of the present nature of their jobs and their financial security in the years to come. Although these concerns raise significant structural challenges, meaningful improvement may be possible on an interpersonal level. Whether we choose to be more thoughtful in our communication with co-workers or more patient in our interactions with those providing some service, we can ease the burden of negative feelings for others at work. In fact, we may even find practicing kindness helps alleviate our own feelings of unhappiness at times. No matter your profession, you likely value the time you spend away from work. Finding time to relax can be essential to remaining productive and happy in your personal and professional endeavors. Don’t let an endless list of home improvement chores keep you from catching a break. With a little help from our team at Porch, you can find qualified professionals to tackle any project, all at a reasonable rate. Whether you’re looking for carpentry , landscaping, or even tv mounting, we can help you achieve all your home improvement goals. Explore our project cost guides and free quotes today to see just how little work you’ll need to do.

We surveyed 1,001 full-time employed people about their jobs, job satisfaction, and experiences on and off the clock. Our respondents identified as 55 percent white collar, 27 percent blue collar, and 18 percent as neither. All respondents were surveyed through Amazon’s Mechanical Turk. To avoid making judgment calls on people’s day-to-day activities and their industries, we asked people to determine what “collar” they fell into. Because our data rely on self-reporting, we are trusting individual respondents on their perceptions. Additionally, the Mechanical Turk population may be skewed toward certain demographics, such as white-collar workers, though every effort has been made to normalize any inconsistencies in sampling.

Feel free to share our graphics and findings with your own audience online for noncommercial purposes. If you do, simply include a link to this page to attribute our team for our efforts. No matter the color of your collar, getting due credit feels pretty good.