For those considering a kitchen remodel, there’s no shortage of sources for inspiration. In glossy magazines, blogs, and home makeover television, gleaming countertops and spotless appliances abound. But when those idealized images collide with the reality of daily living, how pristine do we really keep our kitchens? When we’re rushing out the door in the morning or doing dishes after a long day at work, it’s tempting to let our standards of kitchen sanitation slide. Worse still, even an immaculate veneer may simply mask the germs in our midst, which can thrive without visible dirt and grime. In this project, we determined to gauge how many bacteria may be lurking on various kitchen surfaces. We swabbed three samples from four parts of the typical American kitchen then had bacterial levels tested in a microbiology lab. Our results reveal how many germs may be hiding uncomfortably close to our cooking and the potential dangers of each bacteria we discovered. To see just how many germs could be calling your kitchen home, keep reading.

Our findings reveal a stunning concentration of bacteria in spots that might evade a typical cleaning regimen. Chief among these was the fruit bowl, which possessed more than 3.4 million colony-forming units per square inch. This result may relate to the dish’s particular contents—fruit naturally carries a fair amount of bacteria, and washing it before it goes in the bowl can actually create precisely the sort of moist atmosphere pathogens enjoy. The microwave turntable was also quite germ-intensive, surpassing the bacteria count of a typical toothbrush holder. Many believe the microwave’s heat thoroughly dispenses with bacteria, but harmful germs can often survive. On the refrigerator shelf, roughly 2,300 CFU per square inch can be found. This total may pale in comparison to the aforementioned fruit bowl, but its still more than 10 times the number found on the average bathroom door knob. Although the refrigerator’s cool temperatures do seriously impede bacterial reproduction, they don’t halt it altogether. Thankfully, the cutlery drawer was substantially cleaner, boasting merely 117 CFU per square inch. 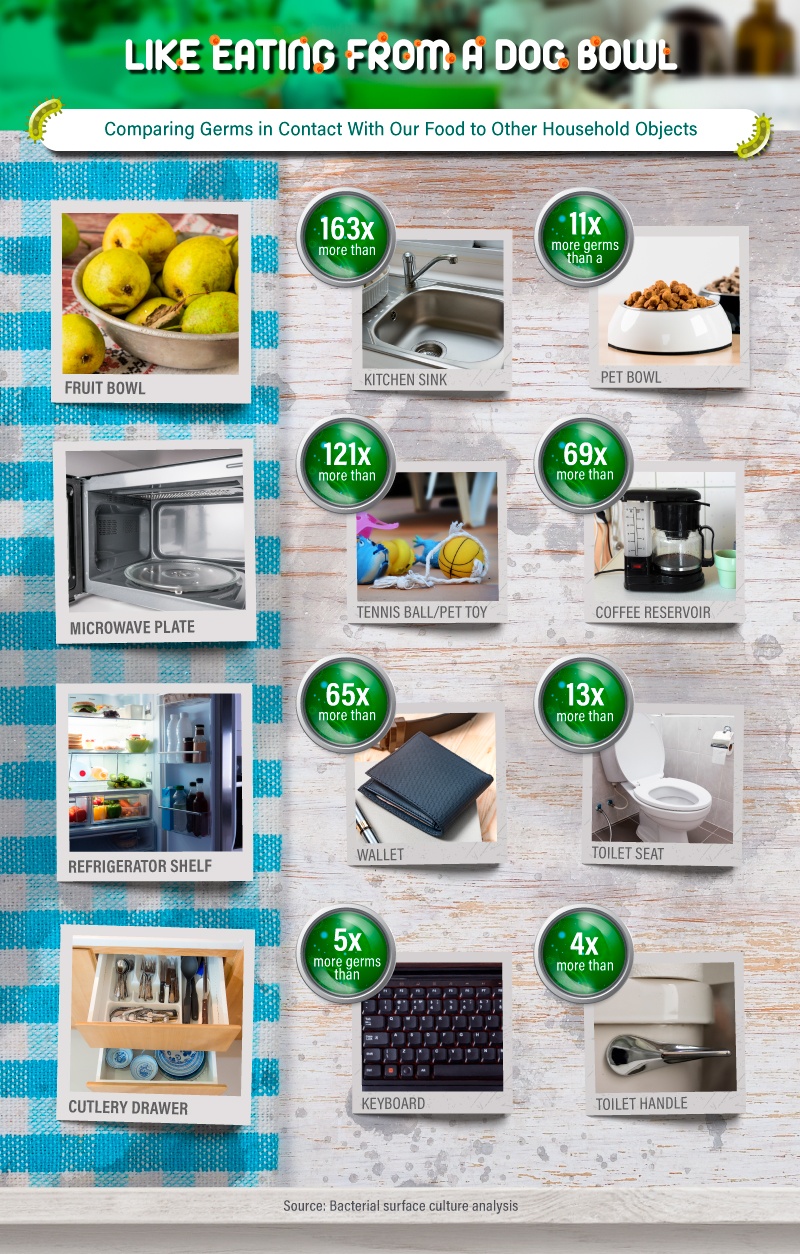 To better convey the degree of bacteria present on various kitchen surfaces, we’ve presented germ data pertaining to other common objects. In this light, the fruit bowl’s results are even more startling: At 11 times the bacteria of a typical pet’s food bowl, you may think twice before biting into an unwashed apple in the future. Meanwhile, the microwave turntable possessed more than 120 times as many germs as a typical pet toy. Some have suggested the microwave’s heat actually functions as an accelerated form of natural selection: Although weak bacteria do perish, their disappearance may just make room for more harmful germs to reproduce and thrive. Even at the lower end of the spectrum, kitchen surfaces play host to germs to a much greater extent than other everyday items. The refrigerator interior had 65 times the amount of bacteria as the average wallet—and wallets can get pretty germy via contact with paper money. The cutlery drawer, meanwhile, had four times more germs than a toilet handle and five times more than the typical keyboard. Just imagine how uncomfortable you’d be resting your fork against either of those objects before eating. 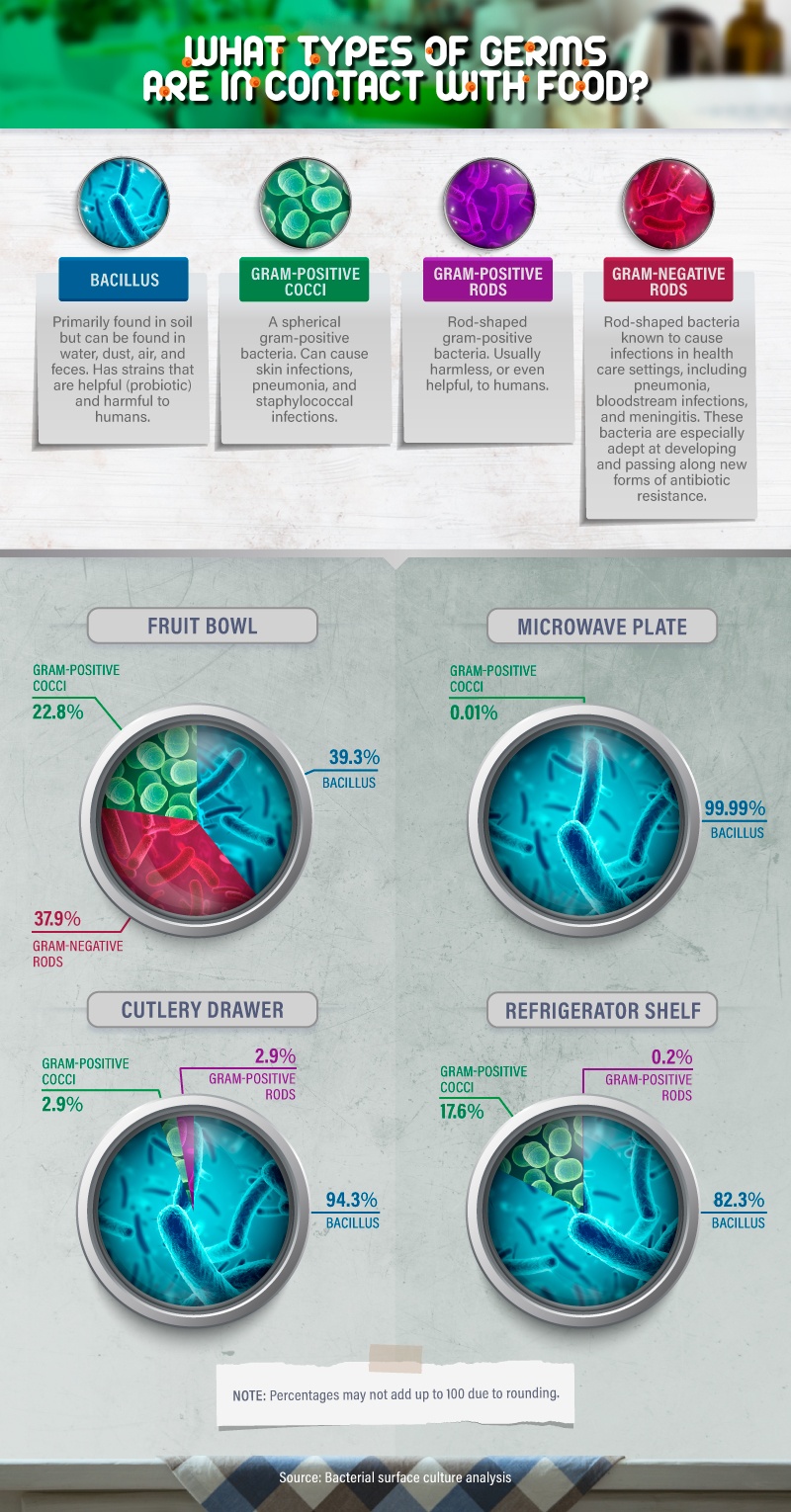 Of course, bacteria can differ vastly in their particular traits and potential for harm. On each of the kitchen surfaces presented, bacillus was the dominant bacterial variety. These germs can actually prove beneficial in some cases (and aid digestion in the human gut), but some types can be deeply harmful as well. Gram-positive cocci, which composed a significant portion of the fruit bowl and refrigerator swabs, are more uniformly harmful. This category of bacteria can lead to skin infections and pneumonia, as well as rarer illnesses, such as toxic shock syndrome. Gram-negative rods can also produce serious illnesses, especially in medical settings. This bacterial variety was found only on the fruit bowl, although they accounted for more than a third of bacteria found on that surface. Gram-positive rods, meanwhile, were found only in the cutlery drawer and inside the refrigerator, and then only in tiny amounts.

Although these findings suggest harmful bacteria may be lurking in many of your kitchen’s corners and crevices, don’t give up the fight against germs just yet. With a thorough plan and the right products, you can protect yourself and your family from the most problematic pathogens. Plus, cooking your food thoroughly will also eliminate many illness-inducing bacteria, so you can rest easy even if a few microbes slip through the cracks. While bacteria always warrant concern, they shouldn’t keep you from putting your kitchen to good use. Of course, a good cleaning isn’t the only kitchen improvement your family deserves. If you’re frustrated by the appearance or function of your kitchen, Porch can connect you with trusted remodeling professionals in your local area. Transforming your home might require less stress and spending than you imagine—and there’s no better reason to clean than to see your brand-new kitchen gleam.

To compile the data used in this project, we swabbed items and places in home kitchens that commonly come in contact with food. We swabbed each location three separate times and contracted EMLAB P&K Laboratories to do a gram-stain count on each swab. The results shown reflect averages of the three samples taken at each location. This study is solely meant to be exploratory, and more significant testing is needed for a scientific study. Objects used as bacteria comparisons were sourced from the National Science Foundation’s Household Germ Study. While we maintain that the data shown are extremely serious to many, we are, of course, presenting it solely for entertainment purposes.

Unlike food slathered in bacteria, our project is well-suited for sharing for noncommercial purposes. If you do use our content and images with your own audience, please provide a link to this page to attribute our team appropriately.