Sitting on the couch watching people tear apart outdated houses and upgrade interiors can make house flipping seem like a piece of cake. But buying a home, renovating on a budget, and quickly selling for a profit is a feat many try but few accomplish. The hidden costs, added stress, and increasing competition aren’t always shown in the numerous house flipping TV shows. With house flipping on the rise, it’s important to know all the facts before jumping on the bandwagon, so we surveyed 370 people who’ve flipped residential real estate in the last five years to get a better understanding of what goes on behind the scenes. Keep reading to see what house flipping really entails. 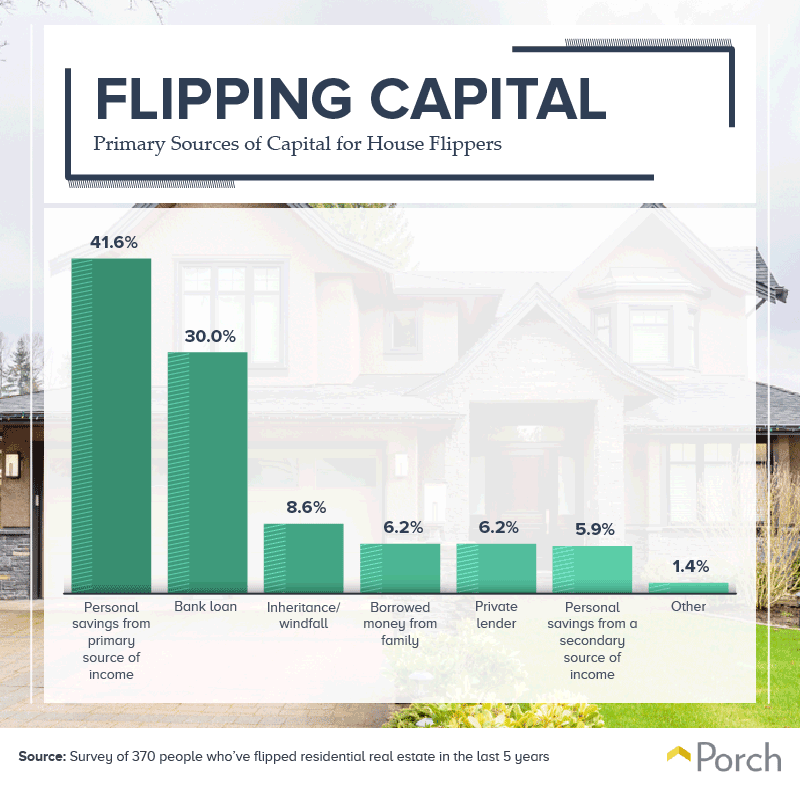 So where do house flippers get the money to begin an expensive project? The majority took the capital from personal savings accumulated from their primary source of income. But borrowing from the bank wasn’t that unusual—30 percent of respondents took out a bank loan before flipping. Borrowing money from family or private lenders was much less common, with only 6.2 percent of respondents obtaining capital from each.

Despite more and more people flipping houses, the profits made aren’t rising with the trend. Of course, buying a house on the cheap and selling it for much more may seem like a quick way to make a buck, but the added expenses and money needed before the project even begins may be why newbies aren’t seeing larger profit margins. The median flipper needed $50,000 for their most recent flip, likely because the average purchase cost was $100,000. While renovations were the cheapest part of the project, costing an average of less than $30,000, underestimating the cost of renovating could be the difference between a large profit and losing money.

It’s often said that keeping family and business separate is wise for entrepreneurs. Flippers may have taken heed of that advice by choosing to work with people outside of their immediate family. Eighty-seven percent of people flipped houses with a partner, but only 10.3 percent worked with a parent, 8.6 percent with a sibling, and 3.5 percent with a son or daughter. The majority chose to work with their significant other (46 percent). Regardless of the relationship between partners, arguments are bound to happen. Fifty-six percent have argued about budgeting, and 46 percent have argued over the timeline. Seeing as those two factors are crucial to maximizing profit in house flipping, finances may be the root of most arguments. However, most dynamic duos reported rarely disagreeing with their partner. Less than 40 percent disagreed occasionally, and 3 percent were always on the same page.

Not an easy task 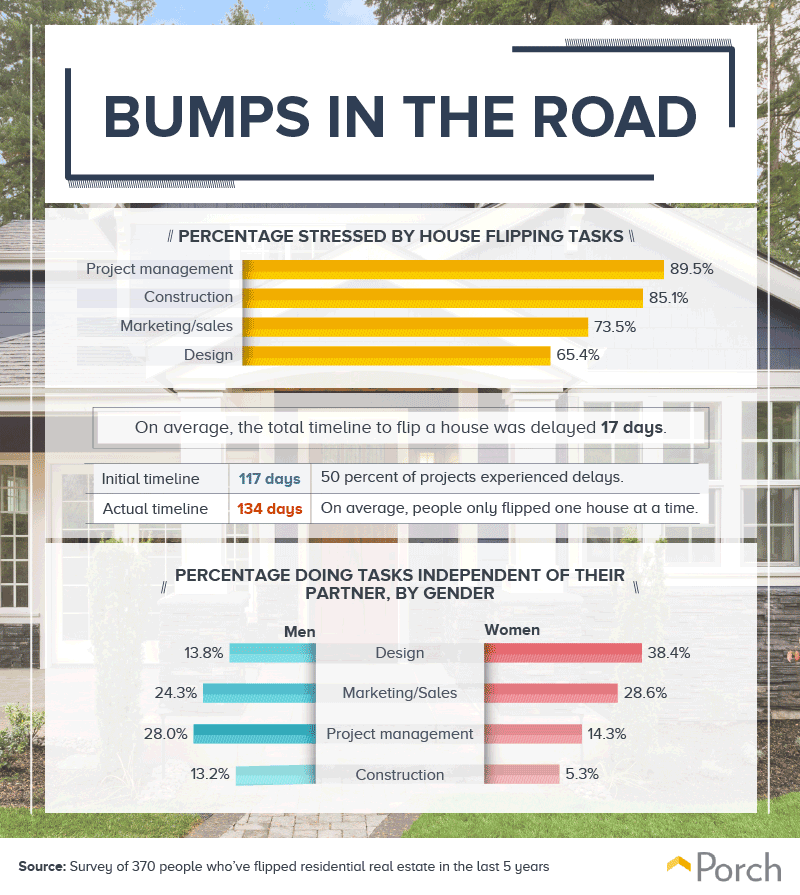 Arguments likely stem from high stress levels and project management is, by far, the largest source of stress. Around 90 percent of respondents reported project management to be stressful, followed by 85 percent reporting the same of construction. Making sure the project is running smoothly and will finish on time is a major goal for flippers—not selling quickly can add expenses and take away from profit—but half of the projects experienced delays of 17 days on average. While most projects are completed with partners, there are aspects taken on independently. Women were much more likely to take care of designing—38 percent of women worked on design independently compared to 14 percent of men. On the other hand, men doubled women when solo project managing. Taking on marketing and sales independently was more evenly split between the genders. 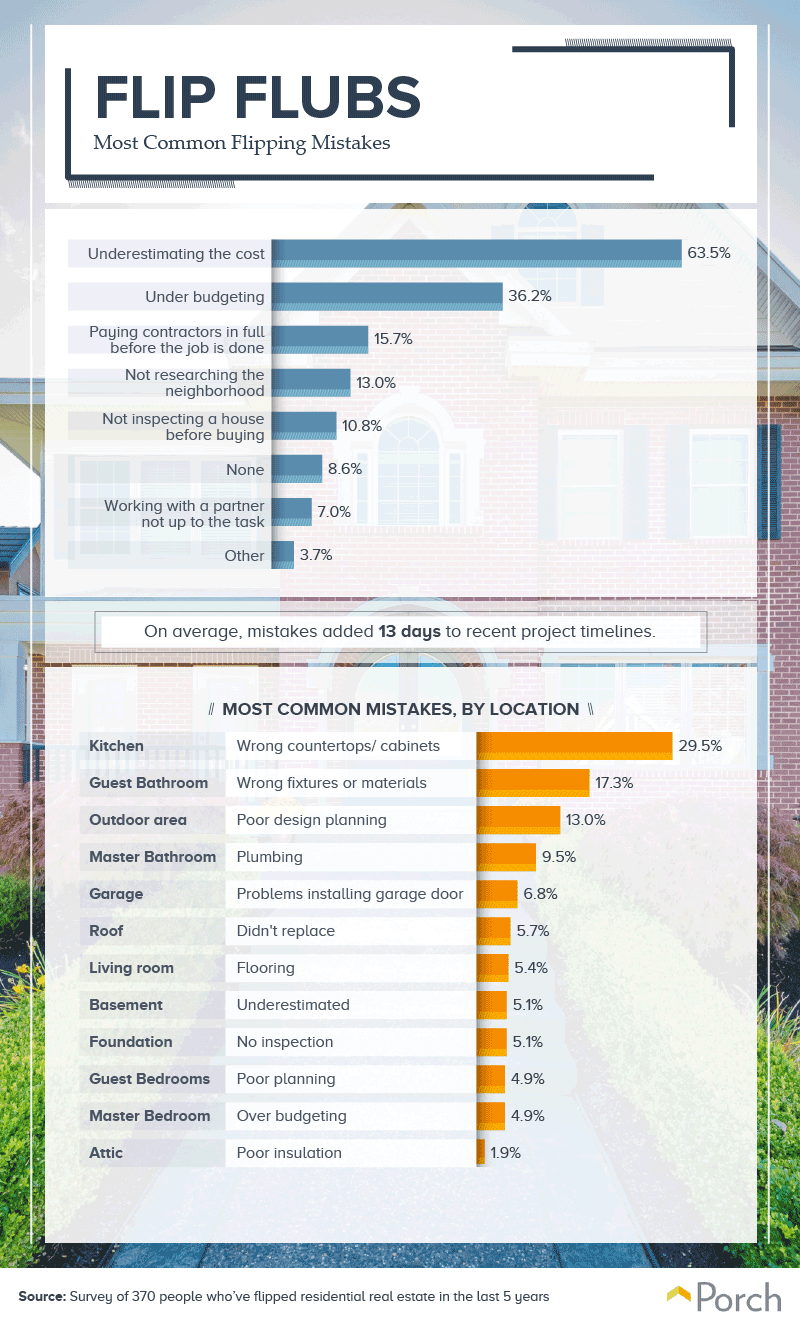 Whether you are a seasoned professional or new to the business, many aspects of house flipping come with the risk of making mistakes. Nearly 64 percent of respondents underestimated the cost of their last project, and 36 percent didn’t budget enough money. Flipping ain’t easy, and mistakes like these can be detrimental to a flipper’s already narrow margins. With extra costs hiding in renovations, these monetary mistakes are likely rooted in construction and design. By location, most mistakes were made in the kitchen, which also happens to be the most common room to remodel. Ordering or installing the wrong countertops or cabinets was the biggest mishap for that room, followed by getting the wrong fixtures or materials for the bathroom. These mistakes cannot only cost flippers extra money in mending but can also cost them a lot of time. On average, project timelines were delayed about two weeks due to mistakes. 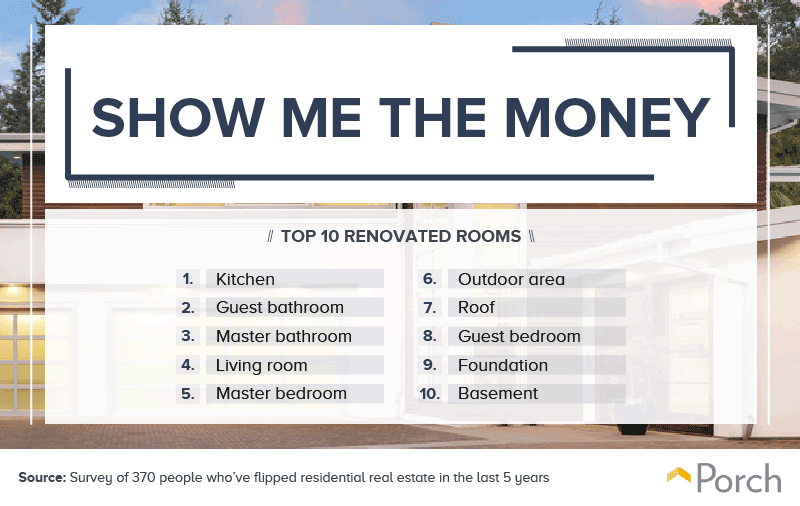 While kitchens were the most common to remodel and for mistakes, they were also considered the most valuable renovations, according to house flippers. Master bathrooms weren’t far behind, scoring more value than living rooms, outdoor areas, and bedrooms. While most people don’t always choose to hang out in their kitchen or bathroom when lounging around the house, those two rooms add immense value and upgrading them provides the greatest return on investment. 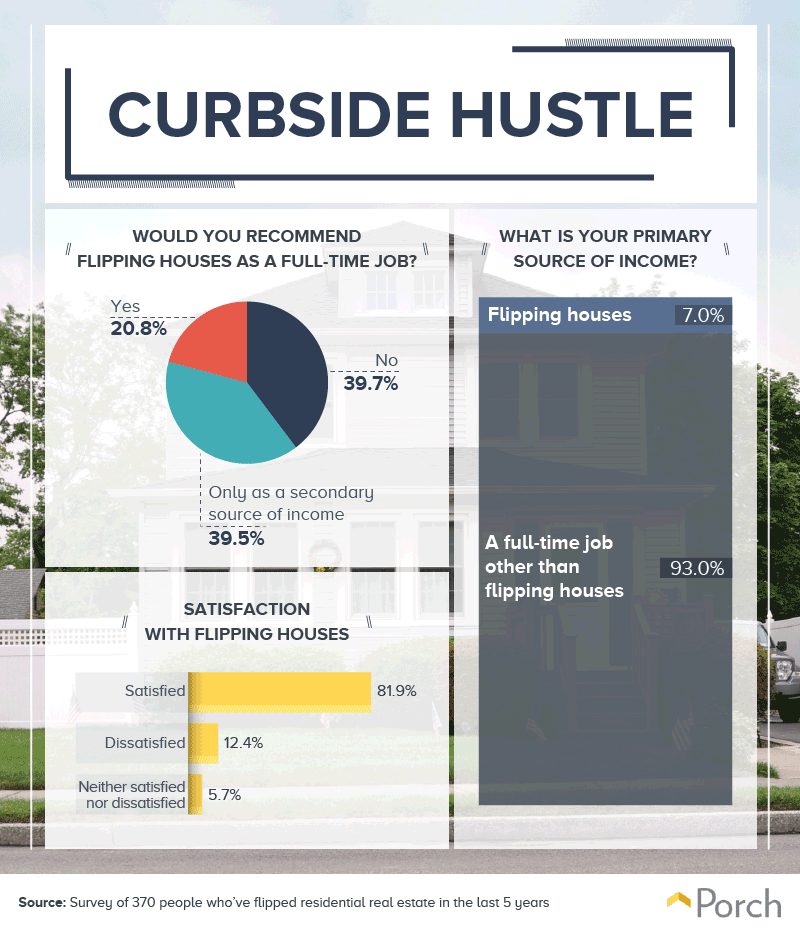 Do real-life house flippers enjoy it as much as people enjoy watching it on TV? Eighty-two percent were satisfied with flipping, but most wouldn’t recommend it as a full-time job. Instead, they would recommend picking it up as a secondary source of income, or not at all. Only 7 percent of surveyed flippers considered projects their primary source of income. The majority had a full-time job other than flipping houses as their main source of support. Unless you have years of experience and can be considered a professional house flipper, the risks of profit loss may be too great to rely solely on flipping to fund your life. But watching the fun unfold on TV never gets old.

Watching houses get demolished and put together again can make home makeovers look easy. And when the makeovers are quick and profitable, house flipping can become an attractive source of income. However, the in-between is filled with unexpected expenses, delays, arguments, and costly mistakes. Despite the increased number of people trying, becoming a successful house flipper isn’t for everyone. Still, home renovations don’t have to be stressful. Whether you’re looking to hang a TV or remodel your entire home, turning to professionals can save you time, money, and stress. Picking the right professional is crucial, and Porch is here to help you find your match. All you have to do is tell us what you need to be completed and our Home Assistant will match you with a professional in the Porch Pro Network. Visit us online to learn more.

We surveyed 370 people who have flipped residential real estate within the last five years for the results of this study. The majority of our respondents were men, who made up 60.3 percent of those surveyed; women made up the remaining 39.7 percent of respondents. The average age for respondents was 35.3 years old with a standard deviation of 9.5 years. To determine the most valuable rooms to flip, we asked participants “What areas are the most valuable for you to renovate when flipping a house?” and instructed them to select all the rooms that applied from the following list, which also contains the percentage of respondents who selected each room: Kitchen: 91.6% Guest bathroom: 55.7% Master bathroom: 47.8% Living room: 35.4% Master bedroom: 28.1% Outdoor area: 22.4% Roof: 17.6% Guest bedroom: 13.8% Foundation: 9.5% Basement: 9.2% Garage: 6.8% Attic: 1.4% Other: 0.8% The data we are presenting rely on a self-reporting survey. There are myriad issues with self-reported data, including but are not limited to: selective memory, telescoping, attribution, and exaggeration.

Know someone interested in flipping houses? There are no hidden fees in sharing the graphics and content of this project for noncommercial purposes. Just make sure to link back to this page so that the authors receive proper credit.