We’ve all been there. You get home from a long day at work or wake up on a Saturday morning, and the absolute last thing you want to think about is your chore list.

Whether you’re the kind of person who likes to keep things in a constant state of tidiness or go into overdrive when company comes over, household chores are generally so pesky that you probably look for shortcuts to minimize the effort it takes to keep your home respectable.

You also most likely agree that certain chores are worse than others. Emptying the dishwasher is one thing, but knowing it’s time to deep clean the bathroom or garage can be a whole other process. So which household jobs are the worst, and how far are we willing to go to avoid doing them? We surveyed over 1,000 people about the tasks they often do themselves and what they’d be willing to give up if it meant never having to scrub, clean, or wipe again. Read on to see what we uncovered. 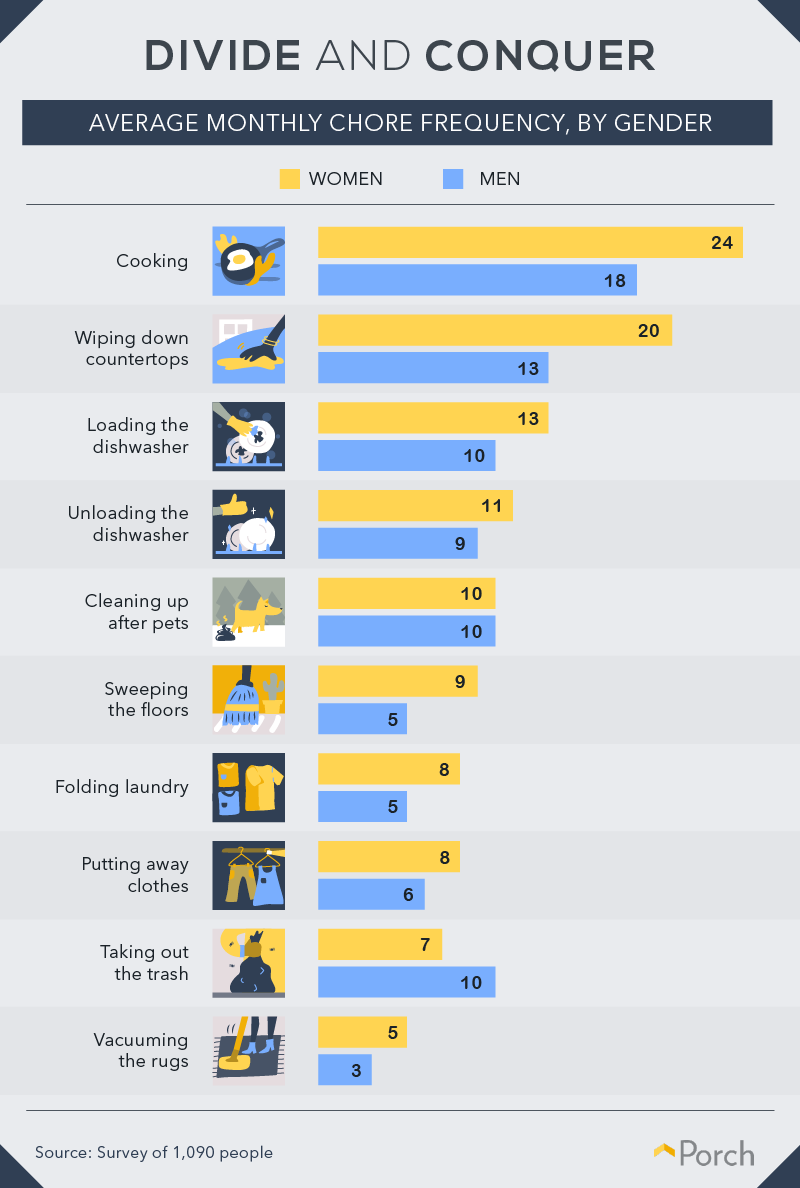 The pesky thing about some household chores is that they’re never really done. Even if you spend a few hours cleaning out the refrigerator or wiping down the bathroom, in a few days or weeks, you’re going to be back at it again. In fact, men and women spent the bulk of their time cooking and wiping down counters, with women reporting cleaning counters seven more days every month, on average, than men.

Even if making an effort to wipe down the surfaces of your kitchen or bathroom might not sound arduous, it’s certainly an important one. Studies show the average kitchen counter can have more germs than a toilet seat, and if you’re cooking food, that kind of contamination can be dangerous. If you’re using a sponge to get the job done, it’s important to replace it regularly to help keep things as sanitary as possible.

Studies continue to show women are responsible for doing more chores around the house than men, typically adding up to nearly an hour more of work every day between cooking, cleaning, and managing the household. Except for cleaning up after their pets (10 days a month), where both men and women contributed equally over the course of the month, the only chore men did more often was taking out the trash (three days more on average).

What would you give up?

Why do today what you could put off until tomorrow, right?. Unless you fall into the relatively small category of people who enjoy cleaning, it’s far more likely that you put off every item on your to-do list as long as possible. You might even think about all the things you’d give up if it meant never having to scrub behind your bathroom toilet again.

Even more than giving up on sex, we found more than half of men and women would promise not to have another drink for 12 months if they could trade in beer or cocktails for not being responsible for their household chores. Nearly 46 percent of women and 31 percent of men would give up alcohol, however, in exchange for never cleaning the toilets again, and almost 33 percent of women would do the same if they didn’t have to think about cooking either. Over 23 percent of men, on the other hand, would give up alcohol if it meant never cleaning up after their pets again. 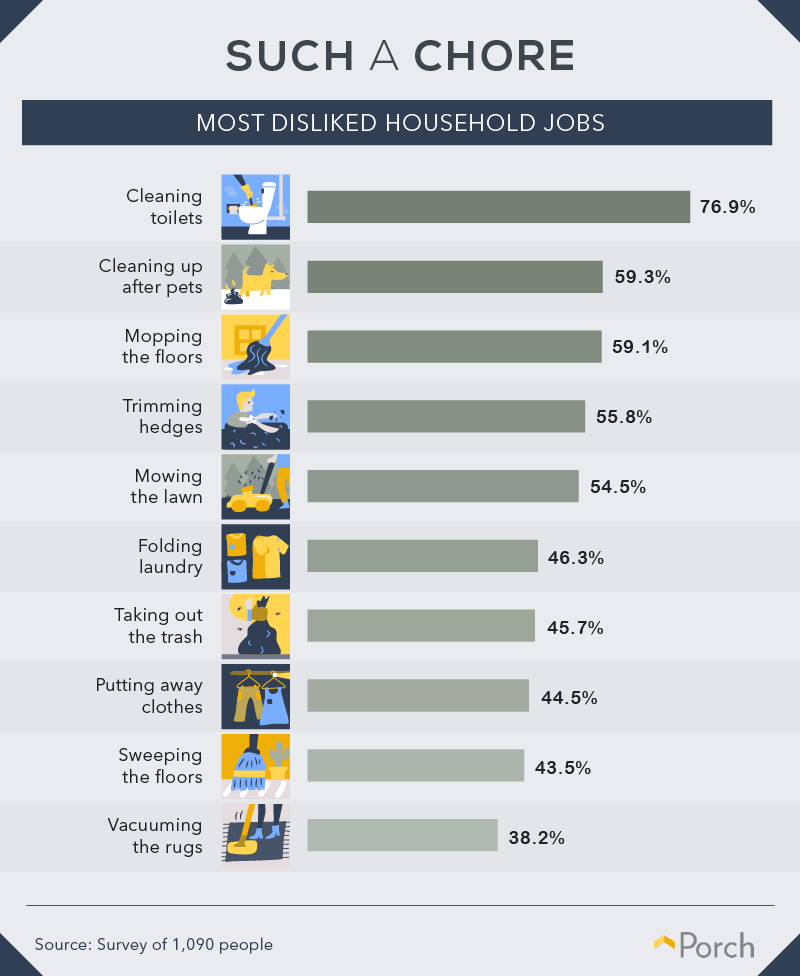 Considering how many people were willing up to give up alcohol and sex to avoid cleaning the bathroom, it’s probably no surprise that nearly 77 percent of people said the chore they disliked doing the most was scrubbing their toilets.

Despite the perceived ick factor, the toilet might not actually be the dirtiest spot in your bathroom. On average, you’ll find more than twice as many germs on the bathroom floor as you will on the toilet, and over 21 times as many bacteria on the bathroom faucet. Worst of all, compared to the less than 300 particles of bacteria found on the average toilet, your toothbrush could have more than 200,000 particles of bacteria.

Learn to love it 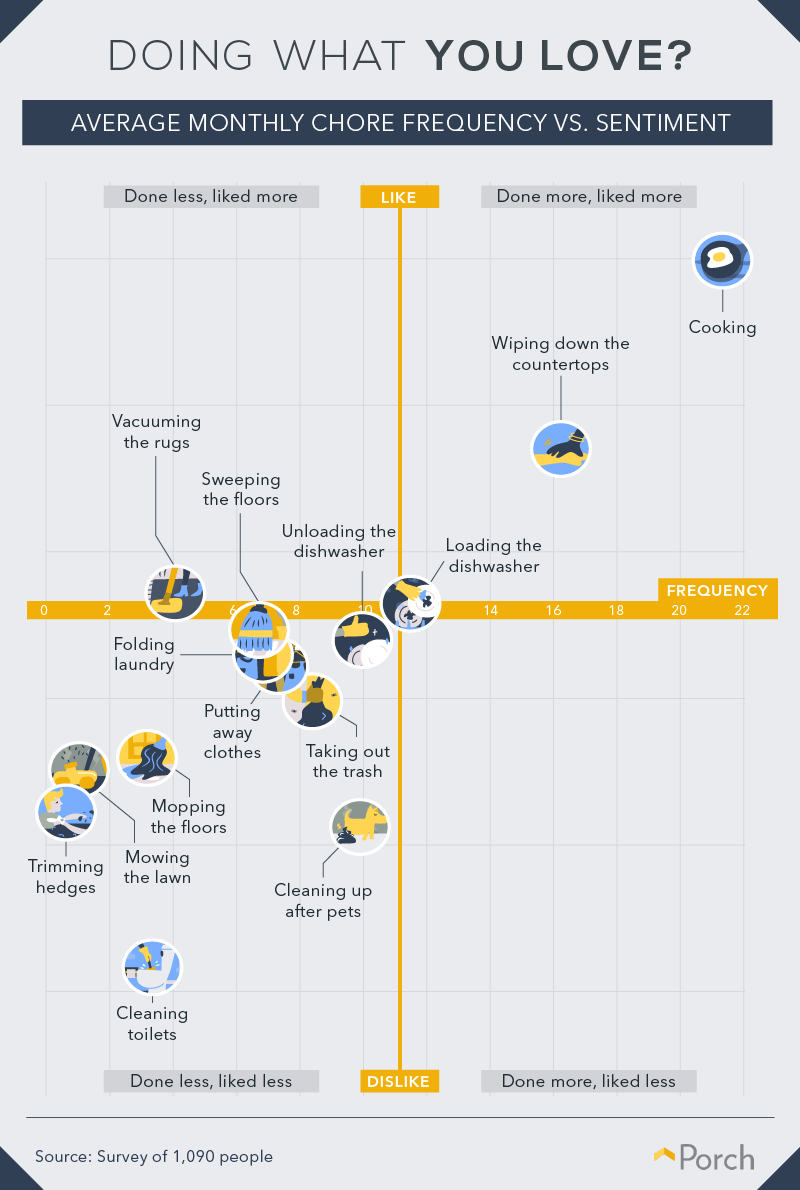 Our resentment for household chores might not be as much about the effort as it is about the number of times every month we have to go back to those same tasks.

Cooking at home rather than dining out is good for your wallet as well as your mental health. We found getting into the kitchen to whip up a meal was among the most common activities people did and also happened to be the chore they felt the best about doing. Wiping down the countertops was also a common and not entirely dreadful chore.

For some people, it might be tasks not done regularly that register as the most disliked. Trimming hedges, mowing the lawn, and cleaning toilets aren’t everyday jobs and thank goodness for that. In addition to cleaning up after pets, each was voted as the least enjoyable household activity. 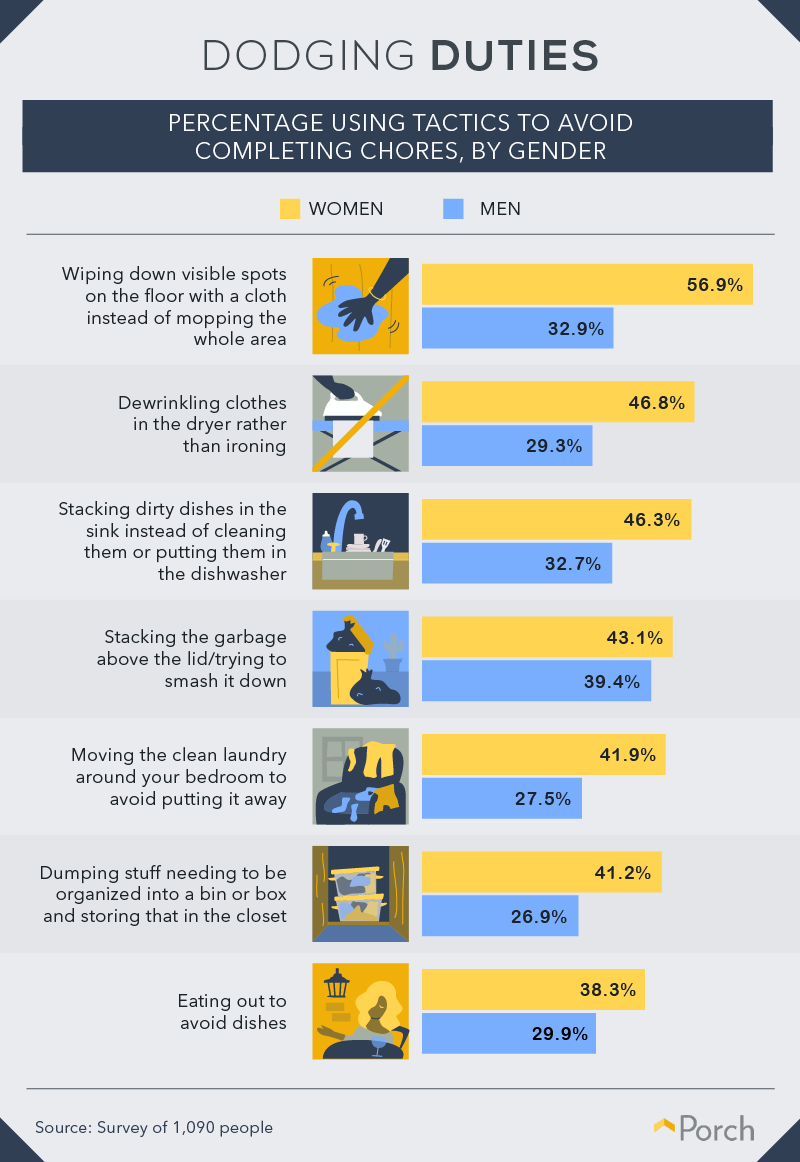 Sometimes it’s easier to think of ways to put off household chores than to commit to deep cleaning or re-organizing.

In the same way that there are tips and tricks to help make cleaning easier, there are easy ways to delay the inevitable. Nearly 57 percent of women admitted to wiping down visible spots on the floor with a cloth instead of mopping, and close to 47 percent avoided ironing by popping their clothes in the dryer instead. Among men, we found a different approach to their procrastination. Over 39 percent stacked garbage above the lid or smashed it into the can to avoid taking out the trash. When compared side-by-side, we see that women admitted to each method of cutting corners more than men.

No matter how much you love your home, there’s a good chance you don’t always enjoy its upkeep. Whether cleaning the toilet, mowing the grass, or wiping down countertops, people were willing to go to great lengths if it meant getting out of their household chores.

Before you give up things you love to avoid burdensome housekeeping, there might be a better way. At Porch, we’re masters of simplified home improvement. Stop procrastinating and start delegating. Need that TV hung or those appliances installed? We’ve got you covered. Visit us at Porch to learn more.

The data presented in this study was gathered by Amazon’s Mechanical Turk service. We surveyed 1,090 people. Of the respondents, 45.4 percent were male, 54.3 percent were female, and 0.2 percent identified as nonbinary. Respondents were also between 18 and 82 years old. These results were not statistically tested.

This study was done using self-reported data. There can be many issues including selective memory, telescoping, attribution, and exaggeration. An attempt was made to ensure the respondents’ full attention, we were unable to verify full honesty in the answers that were given.

Looking for some solidarity as you put off your spring cleaning? We welcome the sharing of this study and all related graphics with your readers for any noncommercial distribution. Just make sure to include a link back to this page so that our contributors get credit too.