It’s a tradition of home makeover television: No room provokes more jubilation than a freshly transformed kitchen. If you’re partial to “Flip or Flop” or “Fixer Upper,” you’re familiar with the features that send homeowners into a frenzy. There are the gleaming countertops, stylish backsplash tiles, shaker cabinets—and is that a pot filler? With all this televised inspiration, it’s no wonder kitchen remodeling is the most popular home improvement project in America. But once the kitchen undergoes its modern metamorphosis, how much cooking do American homeowners actually do at home? It’s one thing to appreciate a beautiful kitchen in the abstract, but putting it to use is another matter altogether. We decided to explore trends in Americans’ home cooking habits by studying social media. Analyzing thousands of Instagram posts tagged with #homecooking, we discovered which states and cities chef it up at home—and which rely mainly on takeout instead. We then analyzed these posts using Google’s Vision API to find out what users are actually cooking across the country. To see where home cooking is alive and well in America, keep reading.

Culinary chops across the country 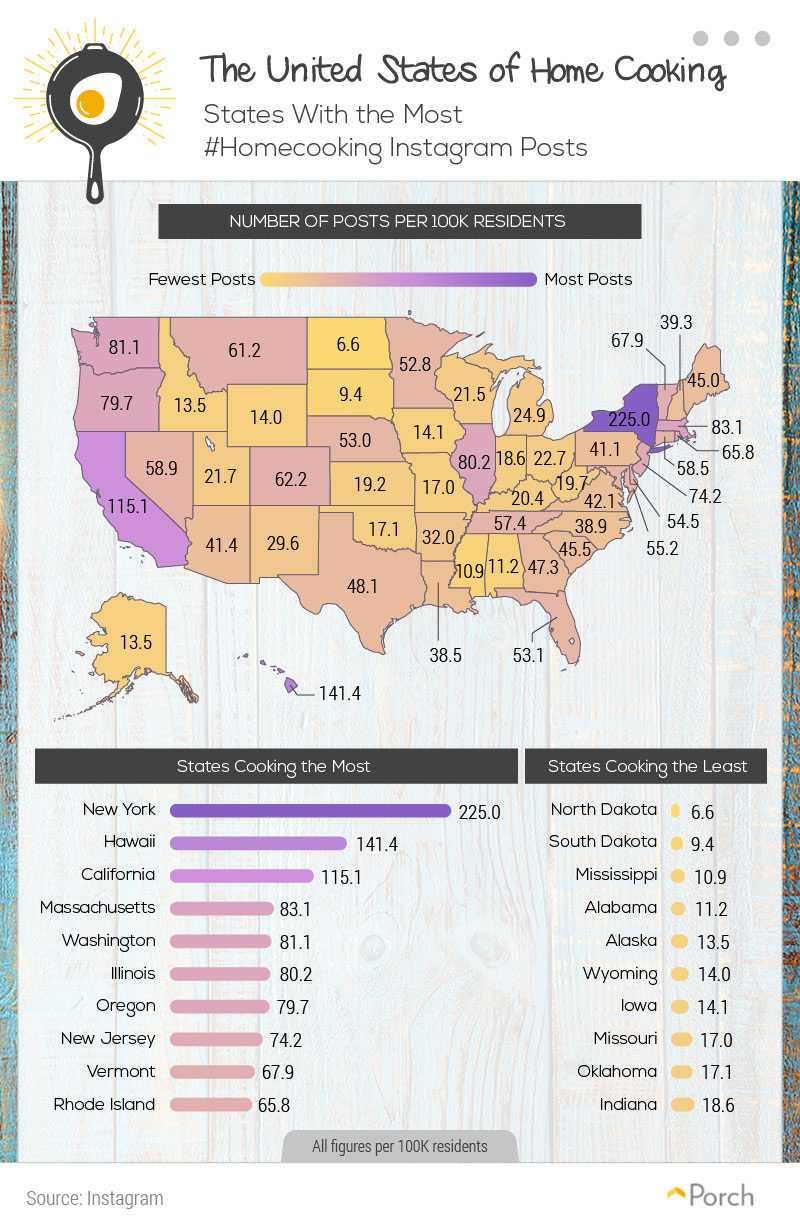 Regarding home-cooking activity, the Empire State rules supreme. Some might find this surprising given New York City’s illustrious takeout reputation, but the state’s high cost of living makes saving by cooking at home seem pretty attractive. In fact, this reality held true for each of the top three #homecooking states: California and Hawaii are also among the most expensive places to live in America. Additionally, #homecooking posts were concentrated on either coast, with Illinois the lone Midwestern state to crack the top 10. At the other end of the spectrum, either the Dakotas aren’t doing much home cooking, or they’re keeping their culinary creations off Instagram. Mississippi and Alabama had the third and fourth fewest #homecooking posts respectively, a concerning trend for states in which public health concerns about residents’ diets continue. Multiple studies suggest consistent home cooking can lead to a more balanced diet than frequently eating out. Now there’s a strong justification for remodeling one’s kitchen—cooking in it could keep you healthier.

For a city known around the world for its fine dining, San Francisco’s residents seem to be dining just fine at home. The city can claim the title of America’s #homecooking capital, with a whopping 745.6 posts per 100,000 residents. Our second- and third-ranked cities, Miami and Atlanta, represented well for home cooks across the South, which included Arlington, Virginia, with a surprise sixth-place appearance. NYC and Jersey City had the leading Northeastern #homecooking cultures, while Chicago and Minneapolis were the top Midwestern spots. All this geographical diversity produces an undeniable conclusion: No region has sole claim to the home-cooking crown. On the other hand, some cities seemed conspicuously uninterested in featuring their homemade culinary creations on Instagram. Texas was home to three of the bottom 15 #homecooking states, and four California cities made the list as well. Interestingly, many of these cities are just a drive away from places full of #homecooking enthusiasm. Aurora, Illinois, for example, is a suburb of Chicago, which ranked 12th overall in #homecooking posts per capita.

On the menu at home 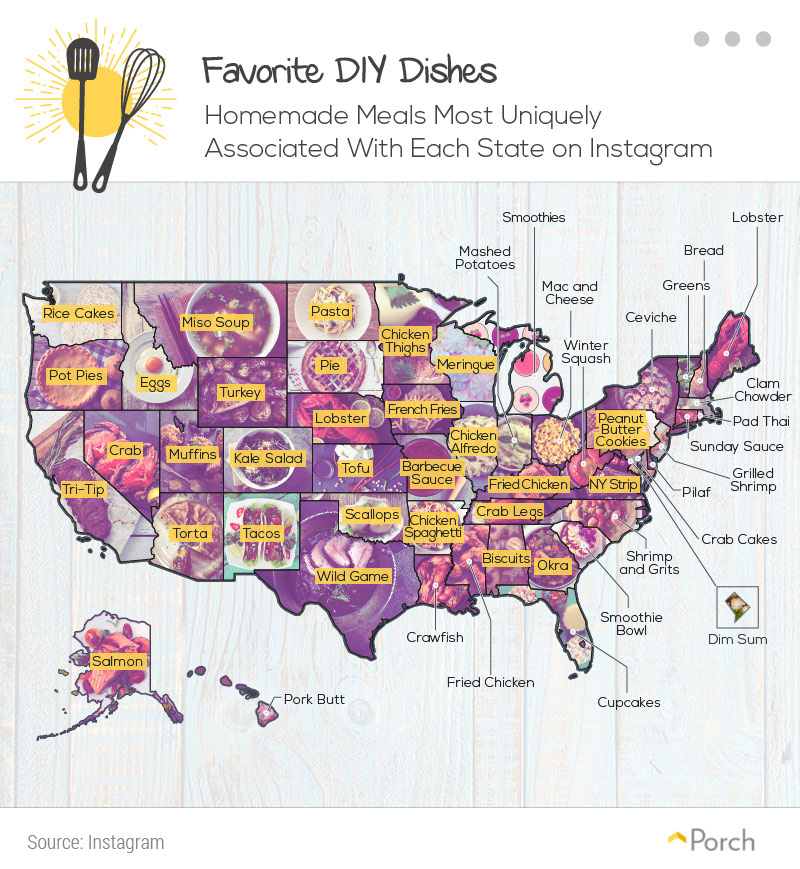 If #homecooking activity varied substantially by state, the dishes each place prepared most relative to other states differed wildly as well. In some places, the most popular home-cooked meal reflected states’ best-known foodie delights: Clam chowder in Massachusetts, crab cakes in Maryland, lobster in Maine, and fried chicken in Kentucky. Other states’ preferences were harder to explain. Virginia, for example, seemed more partial to New York strip than its namesake, which posted most about preparing ceviche. Likewise, Kansas bragged about its penchant for working with tofu, and Idaho touted egg-related dishes above those featuring potatoes. Other results revealed underappreciated local specialties, however. Tri-tip, California’s most popular home-cooked meal, is a beloved specialty hailing from the town of Santa Maria. And while some may know chili as the official state food of Texas, fewer people realize it’s often made with wild game meats such as venison or wild boar. Oh, and the turkey that Wyoming enjoys so much? There’s a good chance it’s been hunted by residents themselves.

Tasting the world at home

Which cuisines do residents of various cities attempt to recreate at home? In some cases, the popularity of certain foods seemed to reflect the local presence of vibrant immigrant communities. Los Angeles’ Koreatown neighborhood is well-known, for example, as are traditionally Greek enclaves in New York City. In Albuquerque, New Mexico, and El Paso, Texas, proximity to the Southern border could explain the popularity of Mexican dishes prepared at home. Other hot spots for ethnic cuisine might be more surprising to those unfamiliar with certain cities’ respective culinary cultures. Fayetteville, North Carolina, was the top city for posts featuring both Thai and Chinese cuisine. Madison, Wisconsin, meanwhile ranked first for both Indian and French cuisine cooked at home. These findings prove various kinds of cooking can thrive in residents’ kitchens across the country, not just in the largest metropolitan areas. 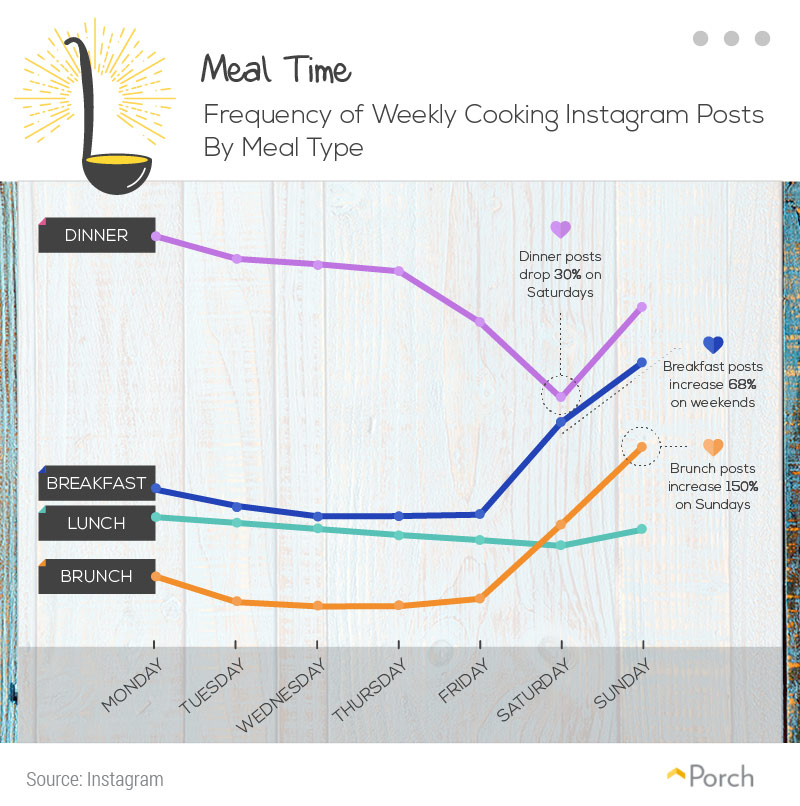 Posts about dinner cooked at home declined precipitously on Friday and Saturdays—once the weekend rolled around, most folks were more inclined to dine out. By Sunday, however, they rose again, likely due to quiet nights at home preparing for the week ahead. Brunch-related #homecooking posts, however, spiked on Saturdays and Sundays, suggesting the weekend’s trendiest meal can be prepared at home, as well as in a restaurant. Breakfast posts similarly surged on weekends. We hope that simply means weekends permit more time to prepare Instagram-worthy morning meals, not that users are skipping breakfast altogether. Conversely, lunch #homecooking posts maintained a relatively consistent rate throughout the week. That’s an interesting finding given the demands of professional life: During the week, are users posting about the home-cooked lunch they packed for work the night before?

A kitchen worth cooking in

Our findings show home-cooking interest varies substantially from state to state, and that some of our at-home culinary experiments can get quite creative. But if you’re hoping to begin a new routine of cooking at home, you don’t need to start by swinging for the fences. Whether you’re looking to save cash or enjoy a more balanced diet, many tasty recipes don’t require much cooking expertise. You could be surprised by the quality of your results—they may even merit an Instagram post. But if your kitchen is in disrepair (or simply too unattractive to make cooking enjoyable), you may find establishing a new culinary routine impossible. Thankfully, meaningful home repairs can often be more affordable than you assume, so long as you work with trustworthy professionals. That’s where Porch comes in, providing ratings and reviews of top experts in your area. With our guidance, you too can have a kitchen you love to spend time in.

To compile the data used in this project, we scraped Instagram for more than 6 million #homecooking posts. Of those, more than 200,000 were geotagged to places within the United States. We ran each image through Google’s Vision API to find out what was in the picture, considering only results with a 70 percent or greater confidence threshold from the API. We combined Google Vision, associated hashtags, and post descriptions to find out what dishes and meals were in each image and compiled data based on the total of each. To find the dishes most unique to a state, we first found the relative state posting rate, weighing posts from different states to find posting rates for each dish’s difference from the mean for that dish. We considered only foods with more than 1,000 total posts and removed outlier dishes with less than a small threshold (determined by state) of postings in each state.

Just like home cooking, our content is best when it’s enjoyed by many. Feel free to use our information and images for noncommercial purposes. When you do, just provide a link to this page to credit our team properly.