Despite the ripple effects of the housing market crash still being felt across the country, the rental market in the United States is currently booming: Between 2006 and 2016, the number of households renting their living spaces increased from 31.2 to 36.6 percent, just a touch lower than the number of households that rented out in 1965. This means there are more tenants than there have been in 50 years across America, and for every tenant, there’s a landlord. While monthly mortgages are actually less expensive than rent in many states, getting past the initial down payment is a significant barrier for nearly 70 percent of renting households. So in an age of high tenancy and low ownership, we wanted to explore the intricacies of the renter-landlord relationship—from repairs, responsibilities, and rent to landlords’ most infamous tenants. We surveyed 563 renters and 532 landlords to get the scoop.

My wrench or yours? 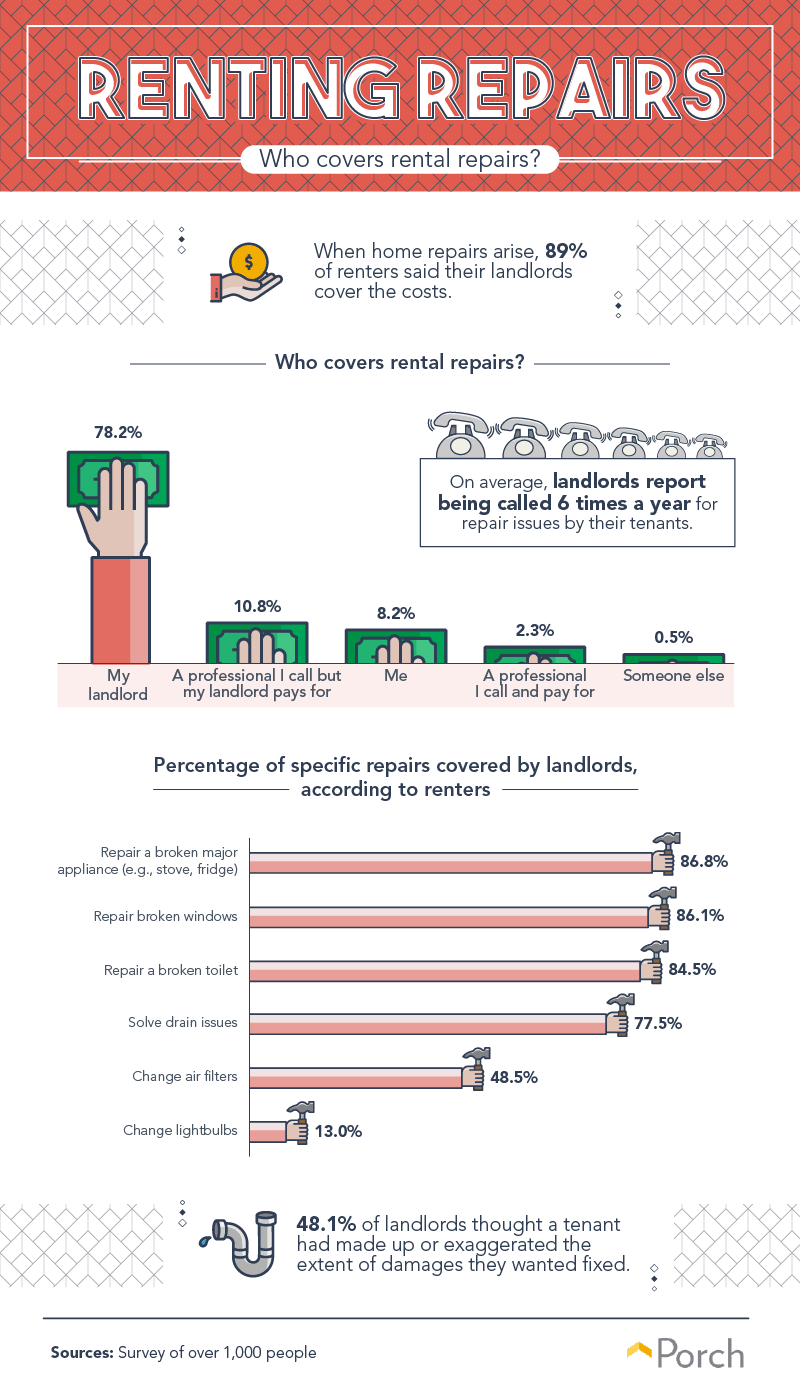 For renters and owners alike, home repair is simply a part of life—but the responsibility to fix a leaky sink or broken floorboard falls on different shoulders depending on the situation. Understandably, renters rarely needed to tackle issues and repairs on their own dime: 78.2 percent of the time, they called their landlord directly, and in the 10.8 percent of situations where they called a professional on their own, the landlord footed the bill. That means just about 10 percent of incidents were taken care of by the tenants themselves, either physically or financially. Landlords most frequently addressed repairs like broken appliances, windows, and toilets, although over three-quarters of drain issues and nearly half of air filter issues met the same fate. A smaller—yet far from negligible—percentage of renters had their landlord change a lightbulb (13 percent). While renters are fortunate to be able to rely on their landlord to complete repairs, it can be frustrating when urgent calls go unanswered. If this sounds like your current situation, here’s how to make sure your landlord gets moving! 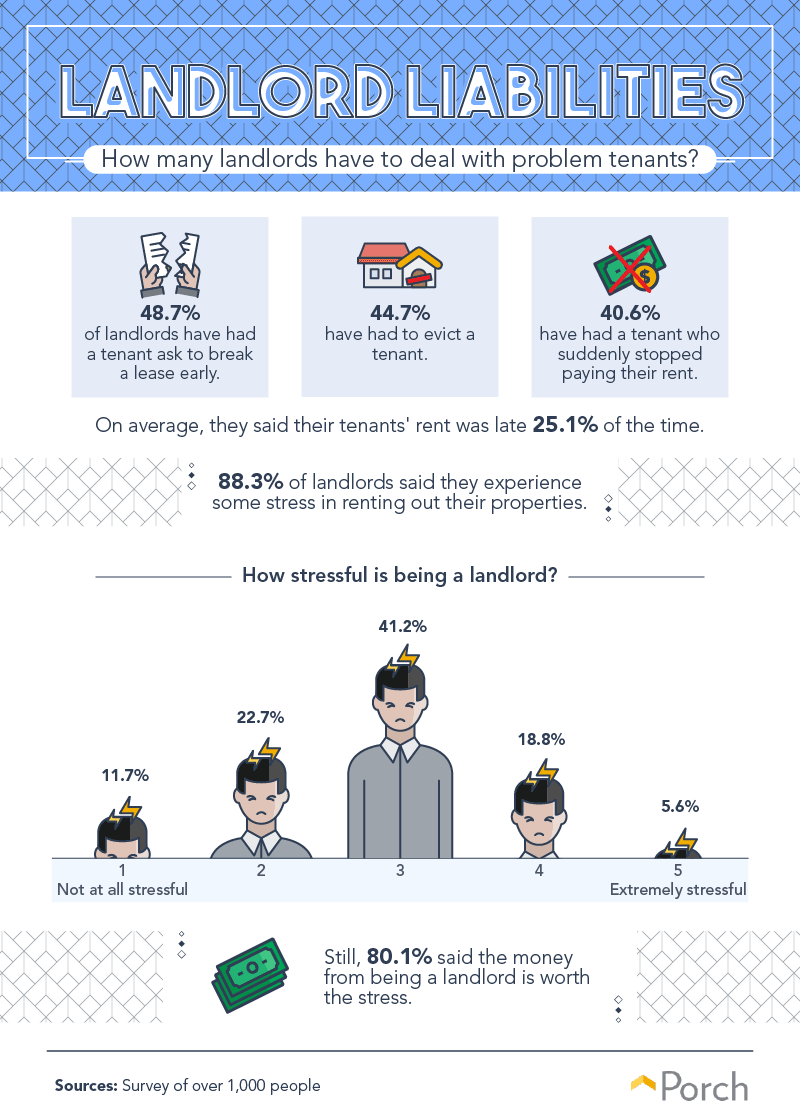 As a landlord, creating and maintaining a healthy relationship with your renters is an important success factor—but that doesn’t mean it’s easy to do. Chasing after people’s rents, having units returned to you in a dire state, tenants who refuse to respond to calls and emails…there is no end to the list of hair-tearing stressors that landlords regularly face, not to mention a ton of hoops to jump through before they can even set up shop. The lion’s share of landlords, just over 40 percent, said that the level of stress they experienced as a property owner or manager was a three out of five (where 5 indicated extreme stress). There were also twice as many landlords who were not at all stressed as there were who were extremely stressed, and there were slightly more level twos (22.7 percent) than level fours (18.8 percent). No matter how many evictions or rent chases they needed to tackle, a whopping 80.1 percent said the stress of being a landlord (a job that has produced its fair share of rags-to-riches stories, if you can pull off the role) was worth it for the money.

Peeking behind the curtain 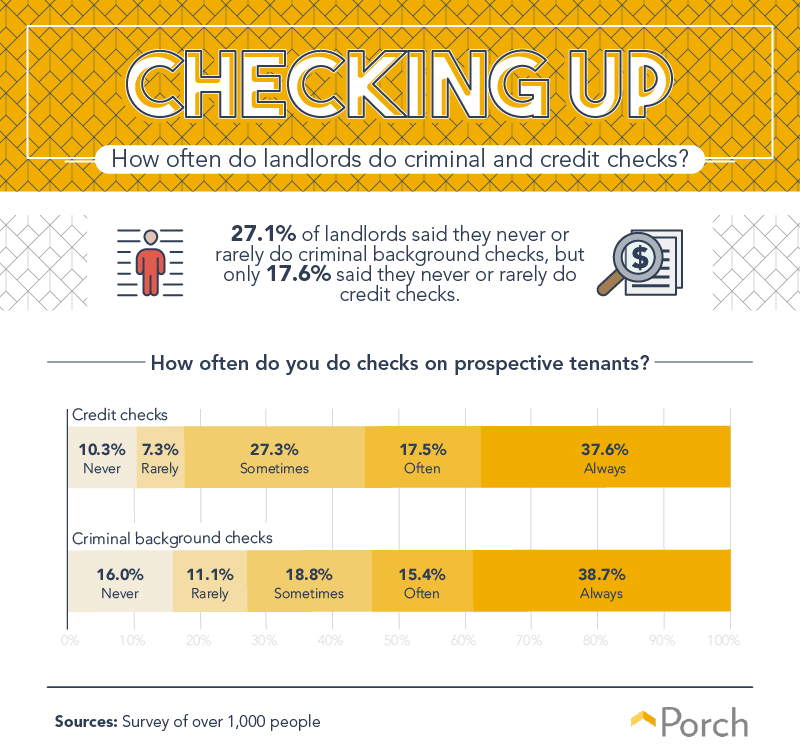 Credit reports are a great vetting tool for companies—namely banks and landlords—that take on a certain level of financial risk by offering you a product or service. Some companies might also run a criminal background check to make sure you have a clean record. But how often do they actually go through the trouble of checking up on you? It might be more often than you think. Nearly 40 percent of landlords said they always ran credit and criminal background checks on their potential tenants. However, they were overall less likely to do a criminal check, which can help reduce their liability and ensure community safety, with more landlords saying they ran this type of data “rarely” or “never” in comparison to credit checks. Meanwhile, another 17.5 percent of landlords conducted credit checks “often,” and 27.3 percent did so “sometimes.”

Tales from the front lines 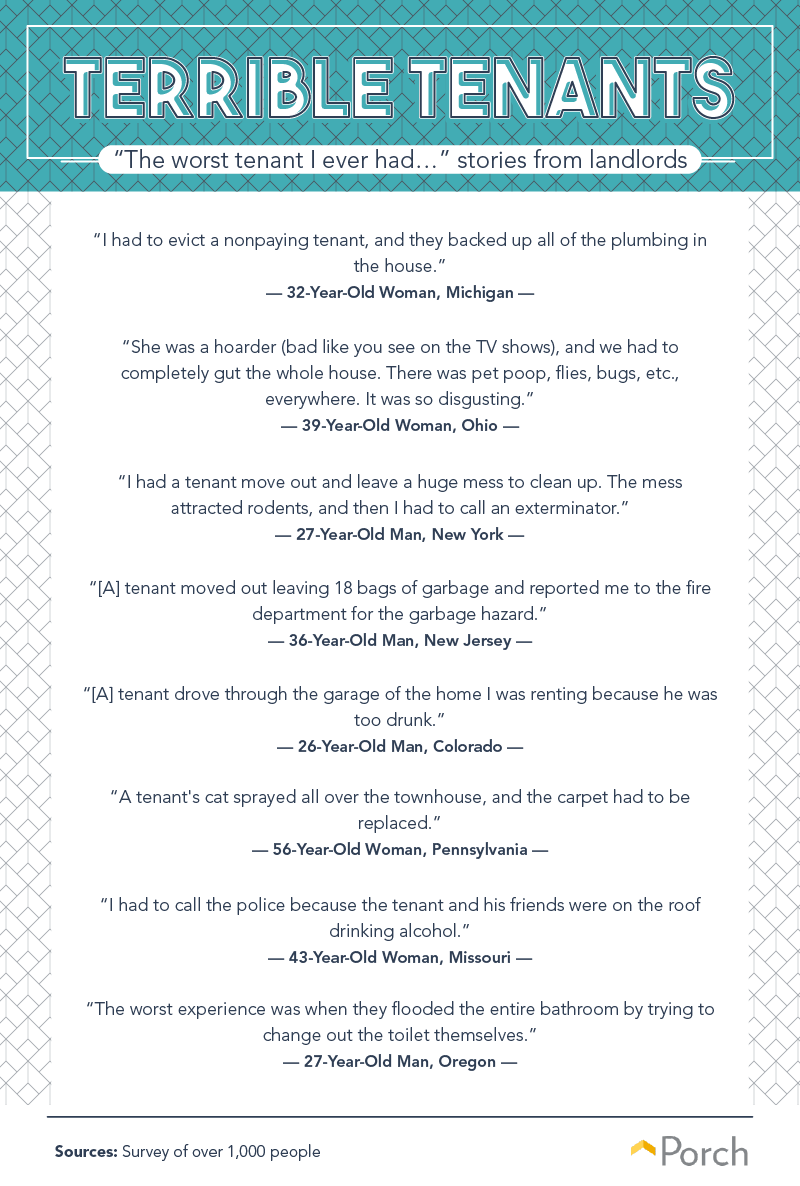 On a long enough timeline, it’s bound to happen: You’re going to get a bad egg. Difficult tenants come in many shapes and sizes, and dealing with them properly requires a cool head and a solid knowledge of landlord and tenant rights in your area. Some of our respondents shared their experiences with their most “memorable” renters, and well, it wasn’t pretty. 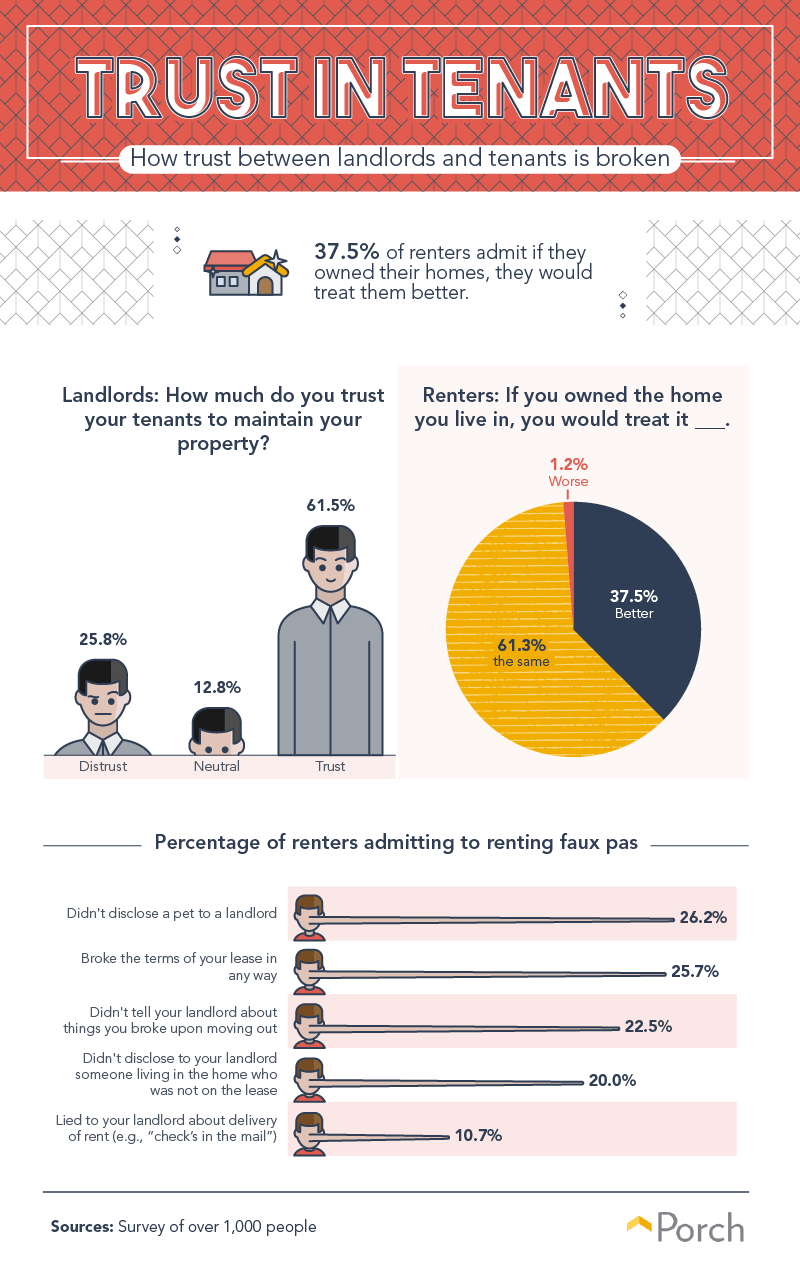 More than half of the landlords in our survey (61.5 percent) trusted their tenants to keep their property in good condition, and a nearly identical amount (61.3 percent) did indeed have their units returned in about the same shape as when they handed over the keys. But what about all of the times when the renters dropped the ball? We really will do anything for our furry friends: 26.2 percent of renters admitted to not disclosing they had a pet, the most common renting faux pas. Breaking one of their lease terms was a very close second, followed by not mentioning certain damages upon moving out. While it might seem tempting to “forget” to tell your landlord that you broke a floorboard to avoid footing the bill, you also can’t assume you won’t be found out anyway: Routine inspections are intended to deal with this exact issue, so make sure to maintain your apartment like you own the place and disclose any damages so that they can be repaired as soon as possible! 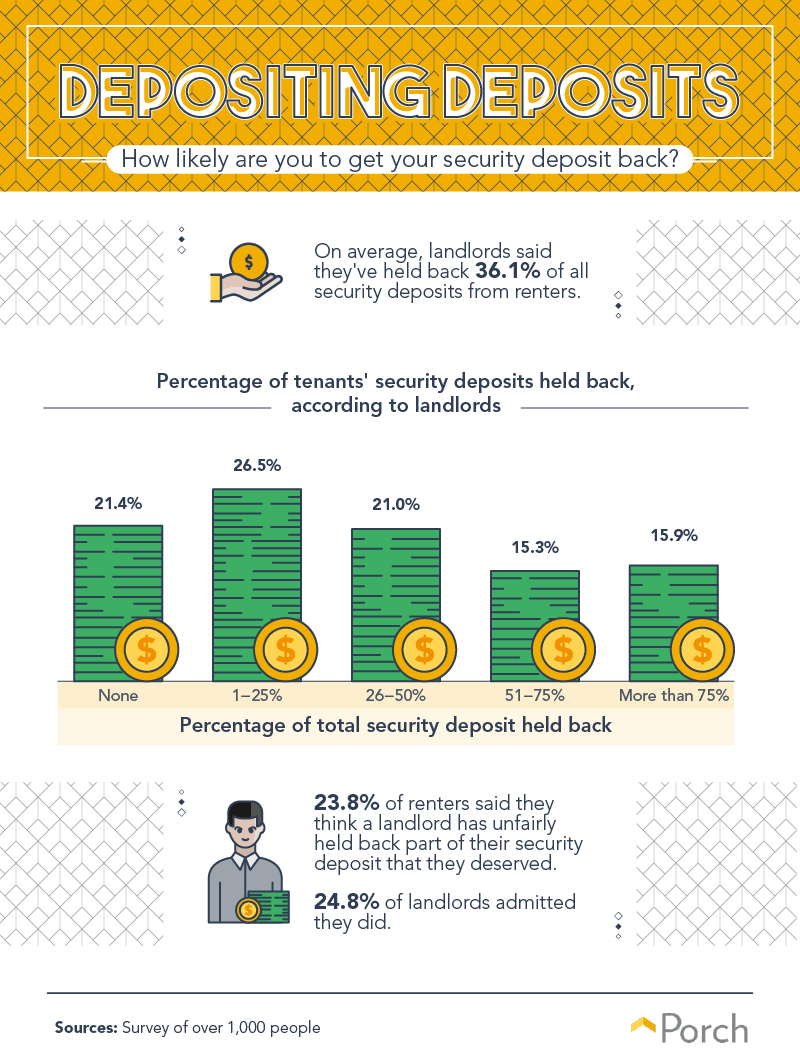 While taking a security deposit is not required by law in the United States, it is a very effective way for landlords to protect themselves if the terms of the lease are violated in any way—for example, if the unit incurs damage that needs to be paid for by the tenants. Of course, landlords can’t just pocket a security deposit because they feel like it: There has to be a legitimate reason like utilities or rent left unpaid. On average, the landlords surveyed held back 36.1 percent of the deposit they collected from tenants, although the highest percentage of respondents ended up retaining between 1 and 20 percent of all deposits. Given the relative seriousness of the infractions a tenant must commit to have their money withheld, a surprising number of landlords needed to do so most of the time: 15.3 percent kept renter deposits 51 to 75 percent of the deposit money they received, and another 15.9 percent did the same 75 percent of the time or more.

The other side of the fence 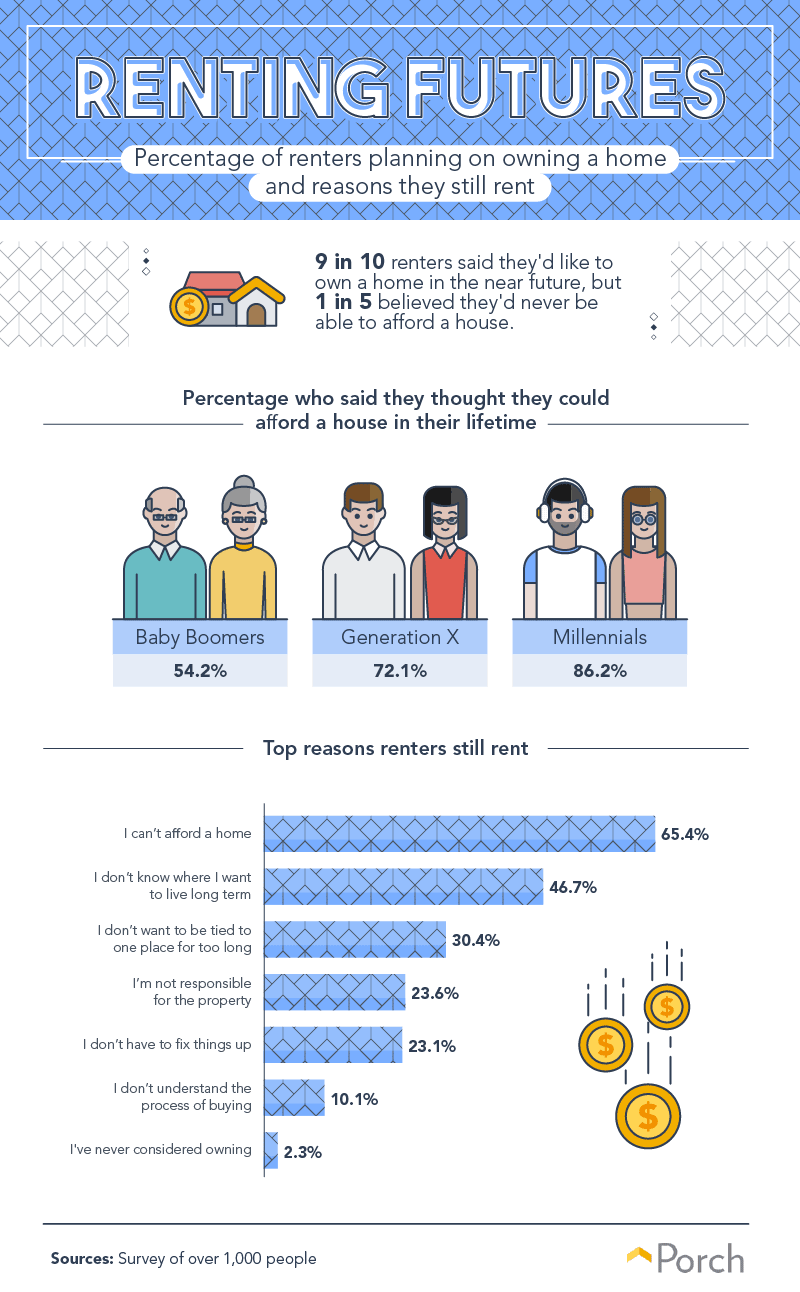 In 2017, homeownership rates in the United States were lower than in 2006, with less than 40 percent of Americans younger than 35 owning their own home (compared to nearly 80 percent of people aged 65 and older who owned property). Nevertheless, our respondents remained optimistic, with 9 in 10 renters saying they would like to own a home in the near future. Not being able to afford a home—an issue experienced by 65.4 percent of respondents—was the most common reason renters still leased a home. In 2018, home affordability prices dipped to their lowest point in 10 years, marking a particularly difficult period for Americans looking to phase out of the rental market. Another 46.7 percent weren’t sure where they wanted to end up in the long term, and 30.4 didn’t want to be tied down to a single place for too long. Just 2.3 percent said they hadn’t even considered owning a home in the first place.

The bond between renters and landlords is harmonious in a perfect world, but often contentious in real life. The landlords surveyed were typically the ones to handle renters’ repairs and also needed to contend with the likes of late rent, evictions, and damages. Notable “worst tenant” anecdotes included mountains of garbage left behind, backed-up plumbing, and biohazardous levels of hoarding. Whether you’re a landlord or owner contending with frequent repairs or a renter who wants to get the job done yourself, Porch is the home improvement service you’ve been looking for. We can connect you to the perfect handyperson for the job, from tiling to security systems (and so, so much more). If something in your home needs a fix, Porch should be your first stop.

To find the data shown above, we surveyed 1,095 Americans over the age of 18 in an effort to understand their behaviors as they relate to the home. To take the survey, you either had to be a renter or a landlord. Of the 1,095 surveyed, 563 were renters, and 532 were landlords. 52.1 percent of respondents were male, 47.1 percent were female, and 0.8 percent selected another option. All security deposit questions were only asked to landlords who indicated they use security deposits for their tenants. Because this is a survey, it may be imperfect or subject to biases typical of any survey, including recency bias, telescoping, and self-reporting biases. We do not make a judgment on the veracity of bias claims, only to say that we do not have reason to believe they are unfairly influencing the study.

While renting out a home isn’t easy, sharing and writing about this article is. You have our permission to use anything above for noncommercial purposes, but we ask that you cite the authors and provide a link back to this page.