How often have you been eating takeout at home on your couch, thinking about what to watch on Netflix, only to open up a social media application and discover that you’re friends are out doing something that seems far more exciting? It’s not a novel concept, and there are varying degrees of FOMO (fear of missing out) that can actually make you feel worse about taking a little personal time for yourself at home. And while it’s not uncommon to get anxious about the idea of people doing fun things out and about without you, you might be surprised how many of your friends would rather stay in at night instead. So how much of what we do is “for the ‘gram,” and how often are most people putting off their social obligations for an evening of peaceful, solitary confinement instead? To shed a little light on the FOMO phenomena, we surveyed over 1,000 people about the times they’d prefer be doing nothing at all and which activities leave them especially longing for the comfort of home. Want to know how often most people are canceling their plans and who regrets it in the end? Read on to find out. 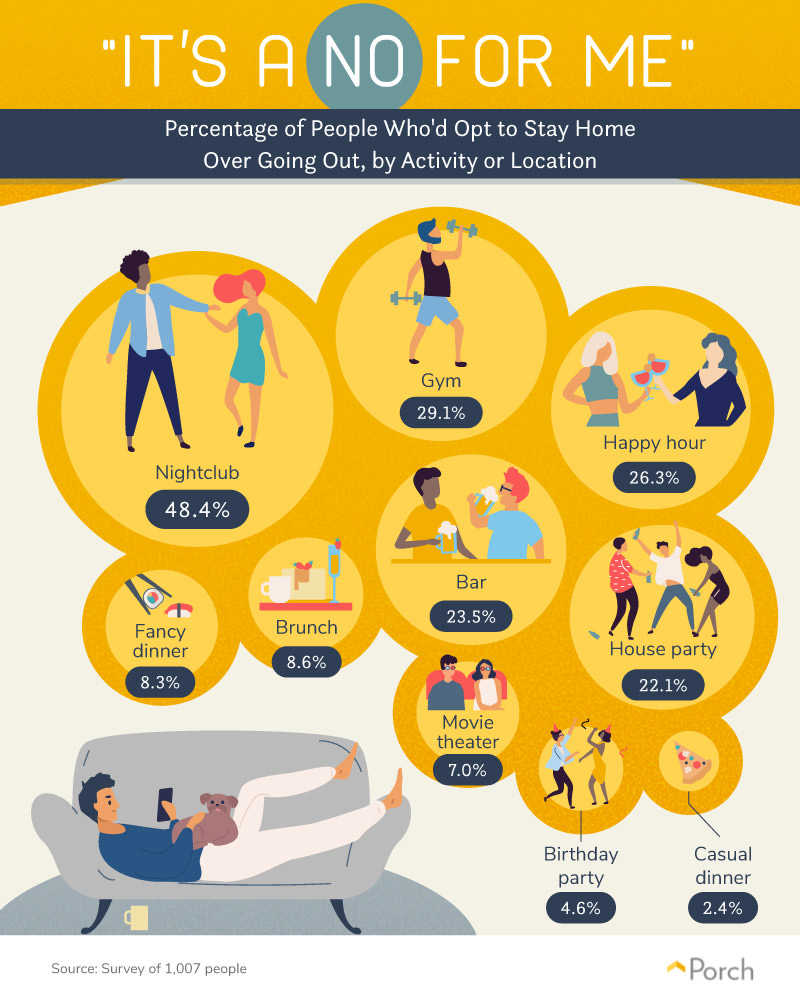 Have you ever been willing to go out of your way to avoid an uncomfortable situation? Perhaps called out sick on a day you’re supposed to give a major presentation or bailed on an event where people are expecting you to show up and speak about something? In reality, these kinds of behaviors aren’t uncommon and tend to be representative of certain types of social anxiety. The most common mental health condition across the country, more than 1 in 3 men and women in America experience anxiety disorders. Still, you don’t need social anxiety to want to avoid a gathering or event from time to time. More than any other social activities, people we surveyed admitted they’d rather stay home than go to a nightclub (48 percent), the gym (29 percent), or happy hour (26 percent). While working out may not seem like a social event on the surface, it can leave people feeling uncomfortable and anxious about the idea of exposing their bodies in public or the subsequent fear of a stranger’s judgment. Unlike big group situations, we found food affairs made people less hesitant than some other functions. Less than 10 percent of people would rather stay home than go out to brunch, a fancy dinner, or even a casual eatery. 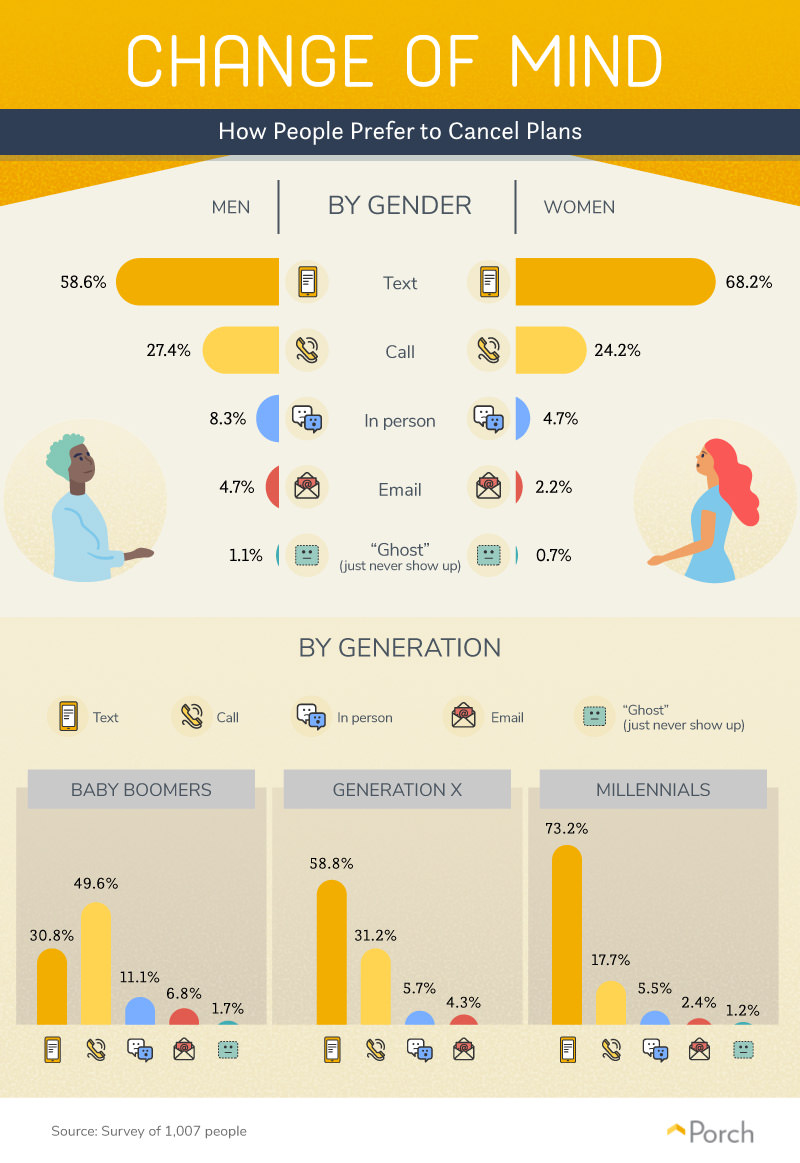 Everyone has that one friend they can usually count on to cancel at the last minute. If we’re being honest with ourselves, sometimes we’re even that friend from time to time. You can try to convince them to come out anyway or just accept that some social settings aren’t for everyone. When you’re gearing up to scrap tentative plans with friends, there’s probably only one way to do it: text. Nearly 59 percent of men and 68 percent of women agreed they’d opt to text their way out of an obligation rather than any other form of communication. Roughly 1 in 4 would choose to call, and less than 1 in 10 would tell someone in person. In most cases, texting as a primary form of communication is an easy way to avoid confrontation or uncomfortable situations when we know the conversation won’t go well. Of course, texting may not come naturally to everyone. While more than 73 percent of millennials preferred texting over other methods of communication, Gen Xers were less inclined to employ that method, and baby boomers actually favored picking up for the phone and having a real-life conversation over canceling through nonverbal means. 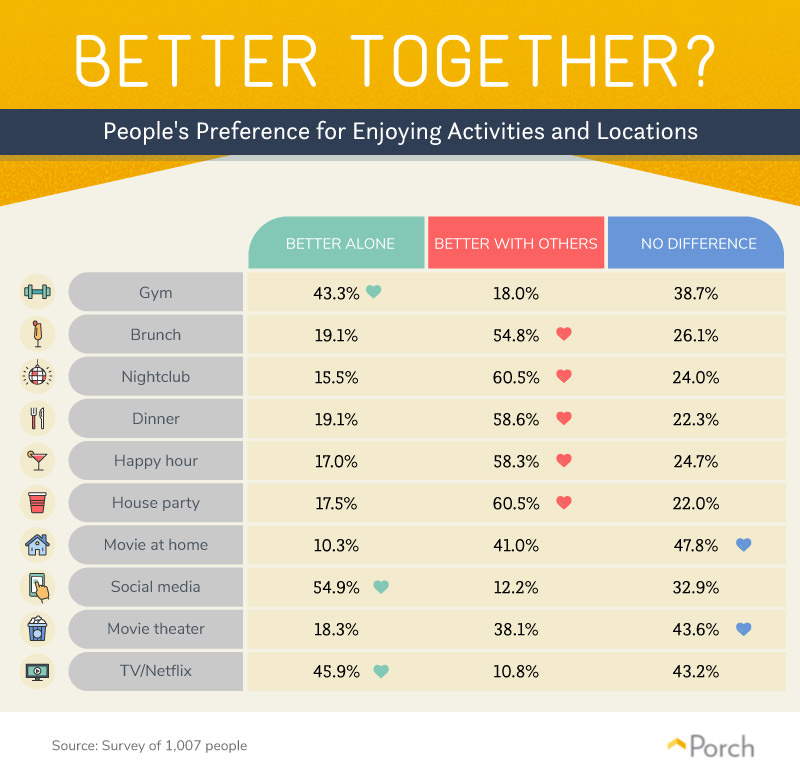 Preferring to be alone from time to time or opting to do certain things on your own rather than in a group doesn’t make you a loner. In reality, it can be perfectly normal to enjoy the time you get to spend with yourself, especially for certain types of activities. More than anything else, people said they would rather be alone when it comes to scrolling through social media, going to the gym, or watching TV or Netflix. Binge-watching may get a negative reputation, but studies have shown it can be more therapeutic than many realize. Watching shows with a positive message or even programs you’ve already seen before, can have the potential to put you in a more positive emotional space than most people expect. And while going at some things alone can feel more satisfying than in a crowd, others are better with the right kind of company instead. Going to a house party, nightclub, dinner, and happy hour were generally voted as the activities people preferred to have friends around for rather than attending on their own. 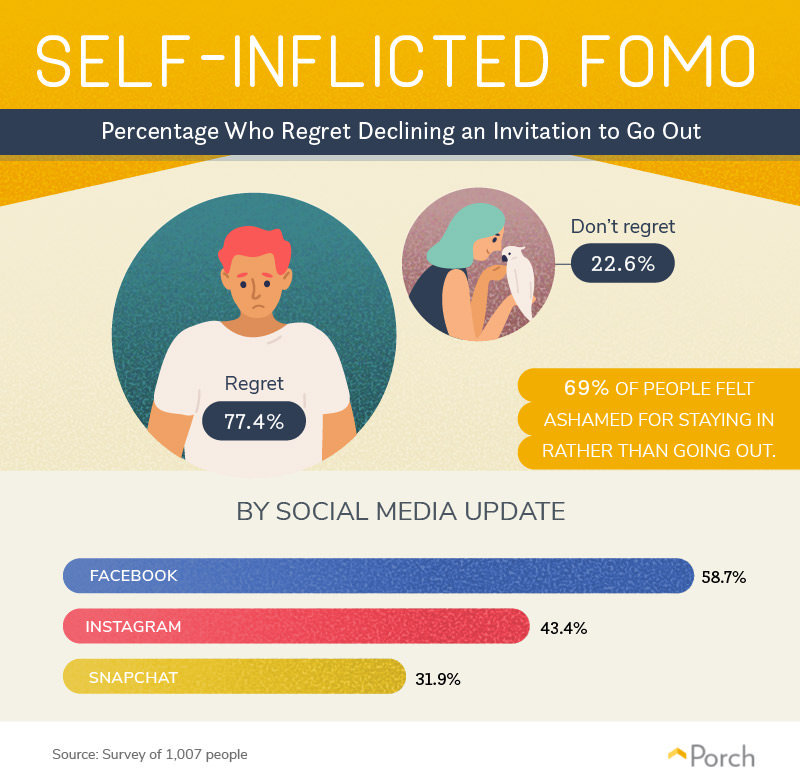 FOMO isn’t just a social meme you see on the internet or a joke between friends. It represents an authentic set of emotions that can control the way we behave and react in social settings. If you often feel compelled to check up on what other people are doing online and manage to feel worse about your decisions or circumstances when you see people having a good time doing other things, you could be suffering from FOMO. Even if they were already in their pajamas, had an early morning, or genuinely didn’t feel like going out, more than 77 percent of people regretted their decision to stay in after the fact. Another 69 percent admitted they felt ashamed about deciding not to go out, and those feelings were often triggered by social media. More than any other platform, nearly 59 percent of people felt poorly about themselves and their decision to forgo joining friends after logging onto Facebook. Roughly 43 percent had a similar response to updates on Instagram, and 32 percent felt similarly after seeing what they missed via Snapchat. No matter what you think you’re seeing online, or who’s posting it, it’s important to remember that what people decide to post to social media isn’t always the truth (or even close to it). 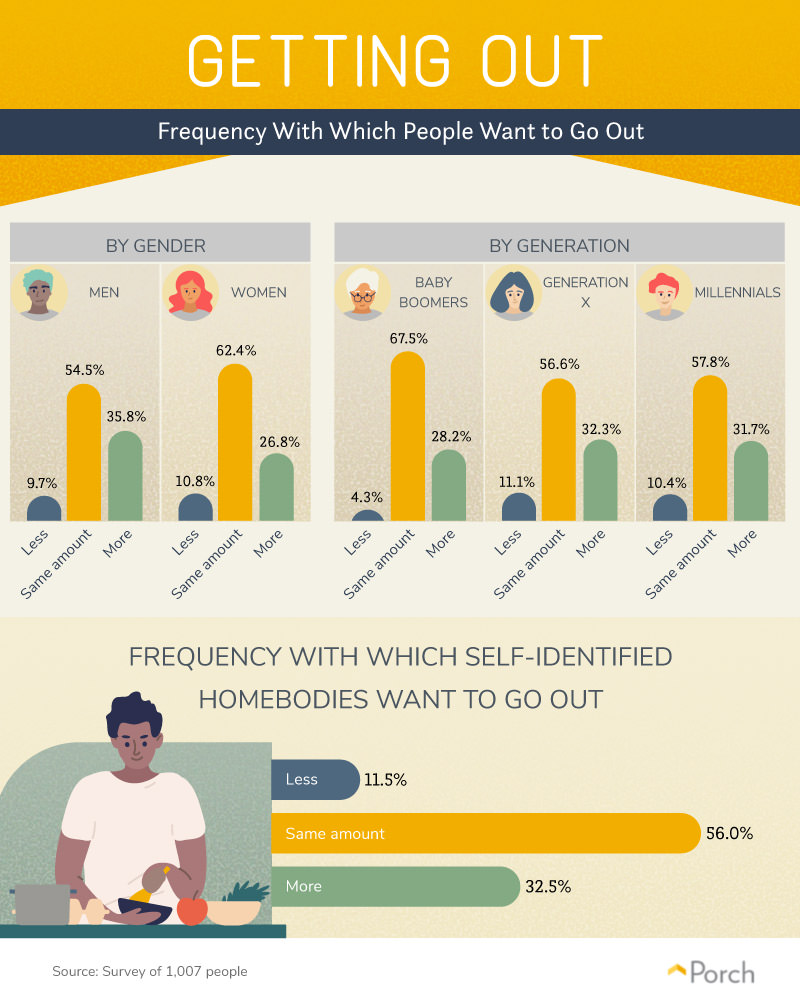 Instead of constantly comparing your social life to the people around you or the things you see online, you might want to consider feeling more confident about occasionally preferring to stay inside rather than going out. Even at a fundamental level, you might think extroverts tend to have it easier, but there’s nothing wrong with preferring to spend time alone or with a small group of friends instead. When asked about the amount of time they spend out and about compared to comfy and indoors, roughly 55 percent of men and 62 percent of women were perfectly happy with the amount of time they spent going out and being social. And while 36 percent of men and 27 percent of women wanted to spend a little more time out, roughly 1 in 10 actually wanted to spend more time indoors than their social schedules allowed. Millennials were generally more inclined to prefer a little extra time outside their homes than Gen Xers and baby boomers and are often credited with prioritizing experiences (the kind of things they might be seeing on social media) over physical possessions. Still, if you consider yourself a “homebody,” you’ve probably made peace with the amount of time you spend enjoying the comfort of your own home—or like the nearly 1 in 3 people we polled—you might be looking for any opportunity to have even more of it.

Learning to love your space

When you get home at the end of the day, kick off your shoes, and change into your favorite lounging clothes, the last thing you may want to do is get dressed to go back out again. Even when you’ve made plans to meet someone for dinner or go to a party, there’s always that chance you might instead text them a clever excuse not to go. And even though wanting to stay inside is a perfectly normal and healthy reaction, some people still feel guilty when they decide to call off plans, especially after seeing what other people get up to on social media. Being home should be one of the most comforting and relaxing places to kick back and unwind. No matter what you like to do at the end of the day, from watching TV or exercising at home to spending time with family, our mission at Porch is to make loving your home a breeze. No matter what home improvement tasks are clogging up your to-do list, our Porch Home Assistant is available 24/7 to connect you with the perfect certified professionals to get the job done. Need help mounting a new TV? How about installing a new appliance? From the little stuff like landscaping to the major renovation projects like flooring or construction, let Porch help you find the pros you need. Visit us online at Porch today to learn more.

We collected 1,007 people’s responses from Amazon’s Mechanical Turk on their feelings toward going to a variety of events or activities with different groups of people. Of those surveyed, 117 were baby boomers, 279 belonged to Generation X, 586 were millennials, and 25 belonged to other generations. 534 of our respondents were female, 471 were male, and two identified as neither.

The data we are presenting rely on self-report, and there are many issues with self-reported data; which can include, but are not limited to the following: selective memory, telescoping, attribution, and exaggeration.

Enjoying our survey during a comfortable night in? Feel free to share the love by reposting the content or images found here on your own website for any noncommercial use. We only ask that you ensure a link back to this page so our contributors earn credit for their work too.