Home security cameras are hot technology: By 2023, experts estimate that sales of these devices and associated services will reach $9.7 billion. As these cameras pervade American neighborhoods, they are creating new opportunities to prevent and prosecute crimes. In recent years, police departments around the country have used surveillance footage provided by citizens to solve high-profile cases. Moreover, these gadgets offer valuable protection in the era of e-commerce, helping homeowners defend their packages from “porch pirates.”

We surveyed nearly 1,000 individuals with home security cameras, exploring how installing these devices affected their sense of security. When asked why they elected to install their cameras, most cited a broad desire for additional peace of mind:

Do home security cameras actually deliver on this potential, helping their owners feel shielded from danger? How do people with these devices collaborate with their neighbors or law enforcement to create safer communities? Our findings shed light on these questions, revealing the real impacts of installing a camera at home. Keep reading to see what we uncovered. 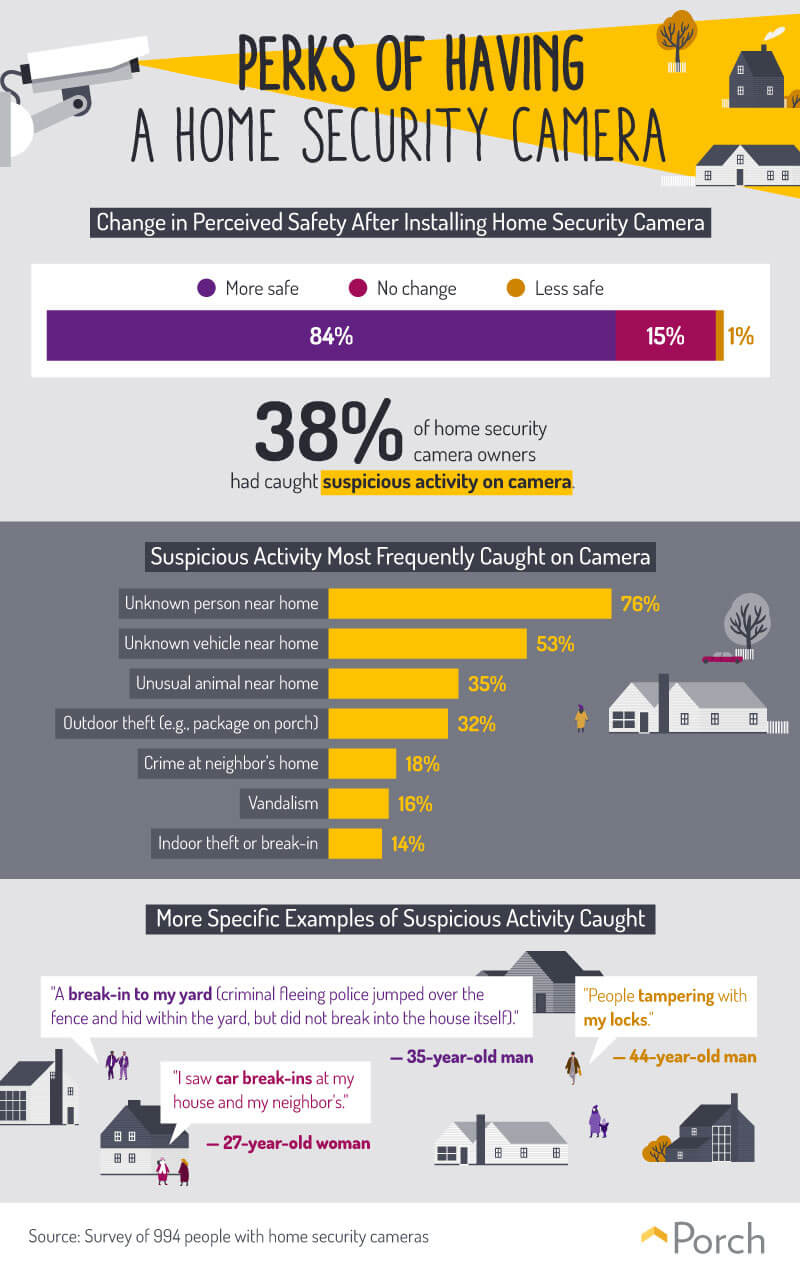 Generally, individuals with home security cameras felt more secure after installing their gadgets: 84 percent felt safer with their devices in place. These feelings alone might justify the cost of the equipment, but some research suggests they really do prevent crime. In a recent survey of convicted burglars, for example, thieves generally described home security cameras as a deterrent. These findings resonate with past research suggesting most burglars steer clear of homes with cameras.

Nearly 2 in 5 respondents said they’d observed suspicious activity via their home security cameras. The most common concerns were an unknown person and vehicles lurking in the vicinity. Additionally, many reported outdoor theft, such as having a package stolen. This kind of theft is increasingly common: During the holiday season, millions of packages go missing.

Respondents were less likely to observe other illegal activity, such as vandalism or a break-in. Yet, some people saw incredibly brazen intrusions on their property, such as individuals tampering with their locks or criminals trespassing into their yards. If not for their cameras, it’s safe to assume many of these respondents would never have known about these threats to their homes. 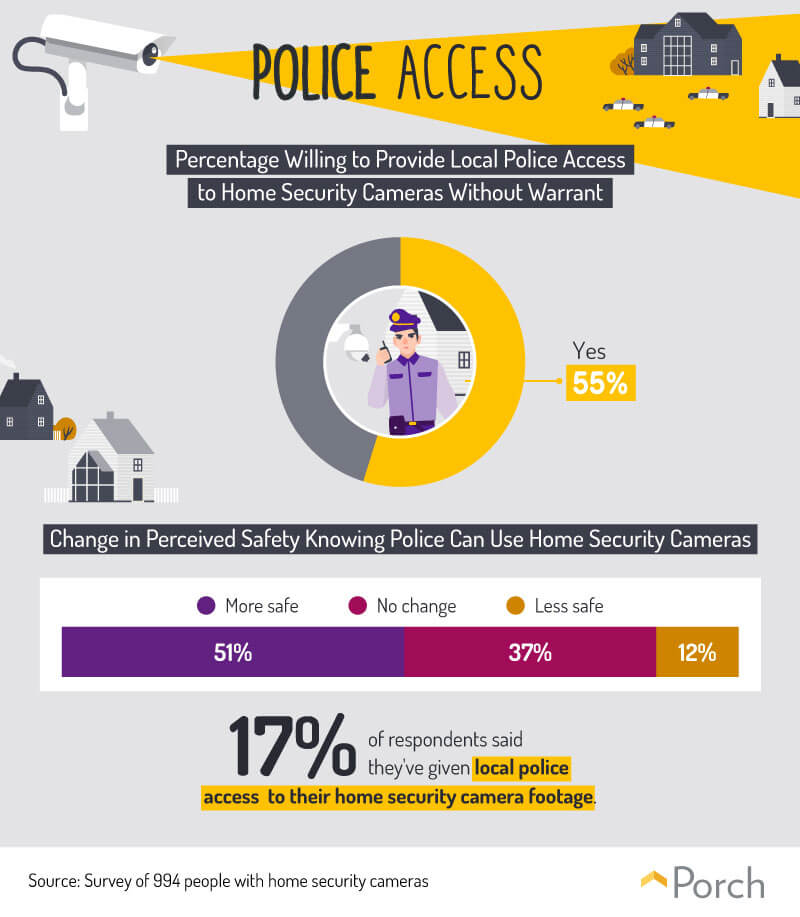 Most respondents said they would willingly provide their home security camera footage to law enforcement without demanding a warrant. In some communities, this voluntary collaboration has led to swift arrests, with neighbors collaborating with the police to catch suspects. Additionally, hundreds of police departments have partnered with security camera companies, allowing officers to see footage posted by concerned citizens.

Among our respondents, 17 percent said they had given local authorities access to the home security footage. In recent years, this access has proved crucial in cases that have attracted national attention. In light of such breakthroughs, perhaps more homeowners will offer to assist law enforcement in this manner moving forward.

A slight majority of respondents felt safer knowing police could utilize home security footage. Moreover, these cameras are hardly the only intersection of home security technology and law enforcement agencies. Indeed, many of these devices are part of comprehensive home security systems, which notify police if intruders are present in customers’ homes. 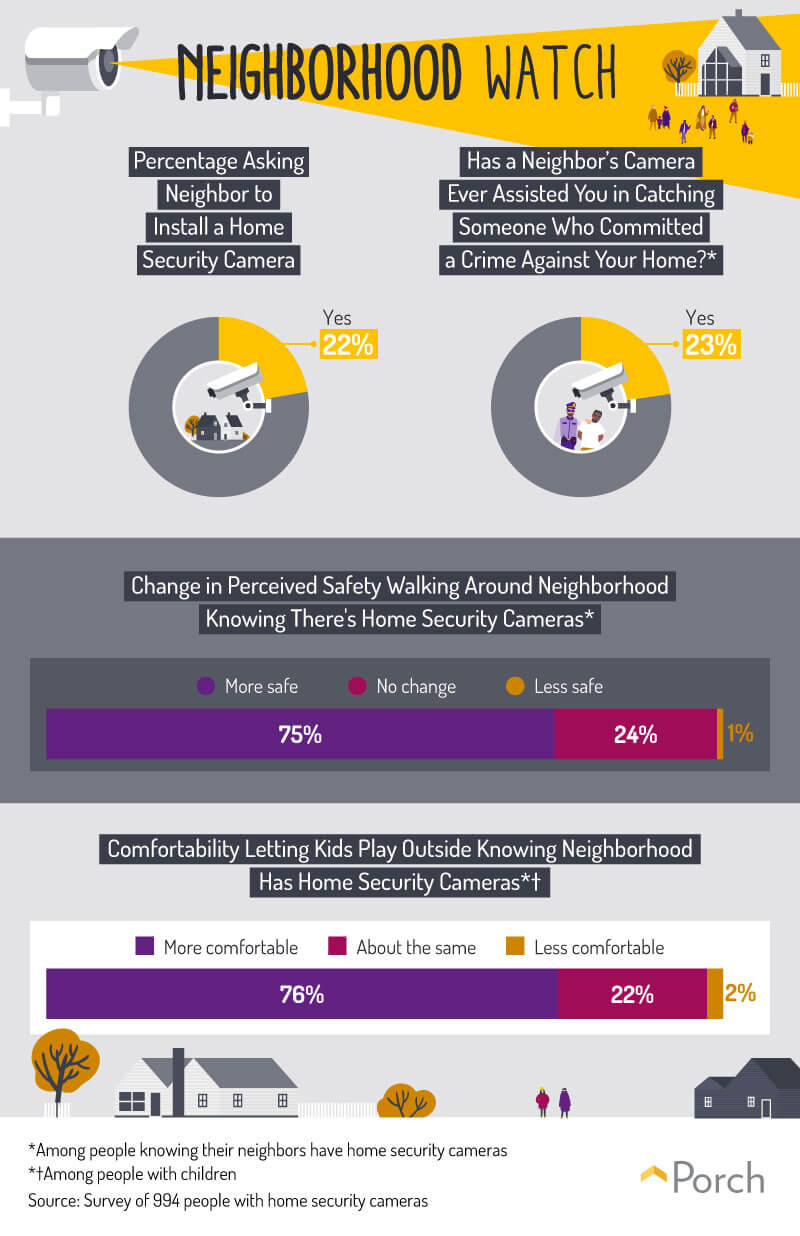 In some communities, neighbors have embraced shared surveillance systems. Certain homeowners associations, for example, have invested in cameras to help monitor the residential streets they manage. In this spirit of collective safety, 22 percent of respondents had asked one of their neighbors to install a home security camera, hoping to increase the security of the neighborhood as a whole.

Moreover, 23 percent said a neighbor’s camera had helped them catch a perpetrator of a crime against their own home. Indeed, these devices are transforming neighborhood watch groups, equipping safety-minded citizens with new ways to alert their communities of potential dangers. Among respondents who knew their neighbors had cameras, three-quarters felt safer because of it.

Additionally, 76 percent of parents said they felt more comfortable with their kids playing outside because they and their neighbors had home security cameras. In an age where parents increasingly rely on digital devices to make sure their kids are safe, these cameras provide yet another degree of security. 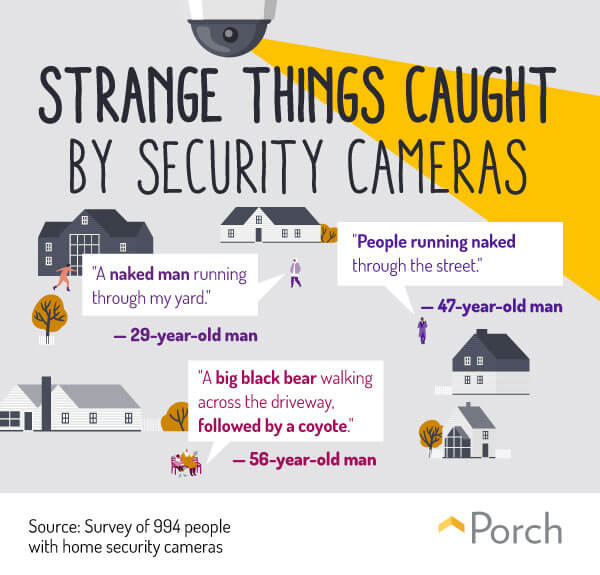 Our results present a compelling case for home security cameras: Most people who own them derive a real sense of safety from these devices. Moreover, many take comfort in knowing their neighbors have cameras as well, creating a shared sense of vigilance within local communities. These gadgets do capture odd and alarming activity fairly often, and some people choose to share such footage with police. But even when nothing threatening is detected, these cameras seem to offer additional peace of mind.

If you haven’t already installed a home security camera, would doing so help you feel safer? Our results certainly suggest so, although you’ll need to select and install the right home security solution. At Porch, we can advise you on all the details, from picking the perfect system to deciding whether to hire a pro or install it yourself. That means you can rest easy knowing your home security camera is working well and watching out for your family.

To carry out this study, we surveyed 994 people on Amazon’s Mechanical Turk platform. To qualify to take the survey, respondents had to say they currently had a working, active home security camera on the exterior of their home. Examples of home security cameras provided to respondents included Amazon’s Ring, Google Nest Hello, and Logitech’s Circle. There was an attention-check question that was located about halfway through the survey. If respondents failed to answer this question correctly, they were disqualified, and their responses up to that point were excluded from the results of our survey.

This study relies on self-reported data. There are certain drawbacks to using this sort of data, including but not limited to: telescoping, exaggeration, and selective memory. We can’t be sure how closely this all lines up with reality.

Is someone you know considering installing a home security camera? If so, our results might help them evaluate the advantages of doing so. Accordingly, we invite all readers to share this content for any noncommercial purposes, whether on social media or their own website. We simply request that you link back to this page whenever you share our work, allowing others to find and enjoy this project in its entirety.