From hammers to hacksaws, the tools of home improvement can turn dangerous quickly if misused. For novices and experts alike, a lapse in focus or preparation can have painful consequences—leaving the homeowner hurt and the project half-finished. Still, the risks of home improvement haven’t dimmed DIY enthusiasm, with millennials particularly eager to attempt their own upgrades. If you have your heart set on getting handy, you’ll need to know which tools are most likely to cause injury and which common accidents to avoid. In that spirit, we’ve analyzed data from the National Electronic Injury Surveillance System (NEISS), a repository of information about Americans’ emergency room visits. Our findings indicate how people injure themselves during their home improvement efforts, including which tools and body parts are often involved. While all tools should be used with caution, our results suggest which ones account for a disproportionate number of accidents. To find out which implements you should really be cautious when using, keep reading. 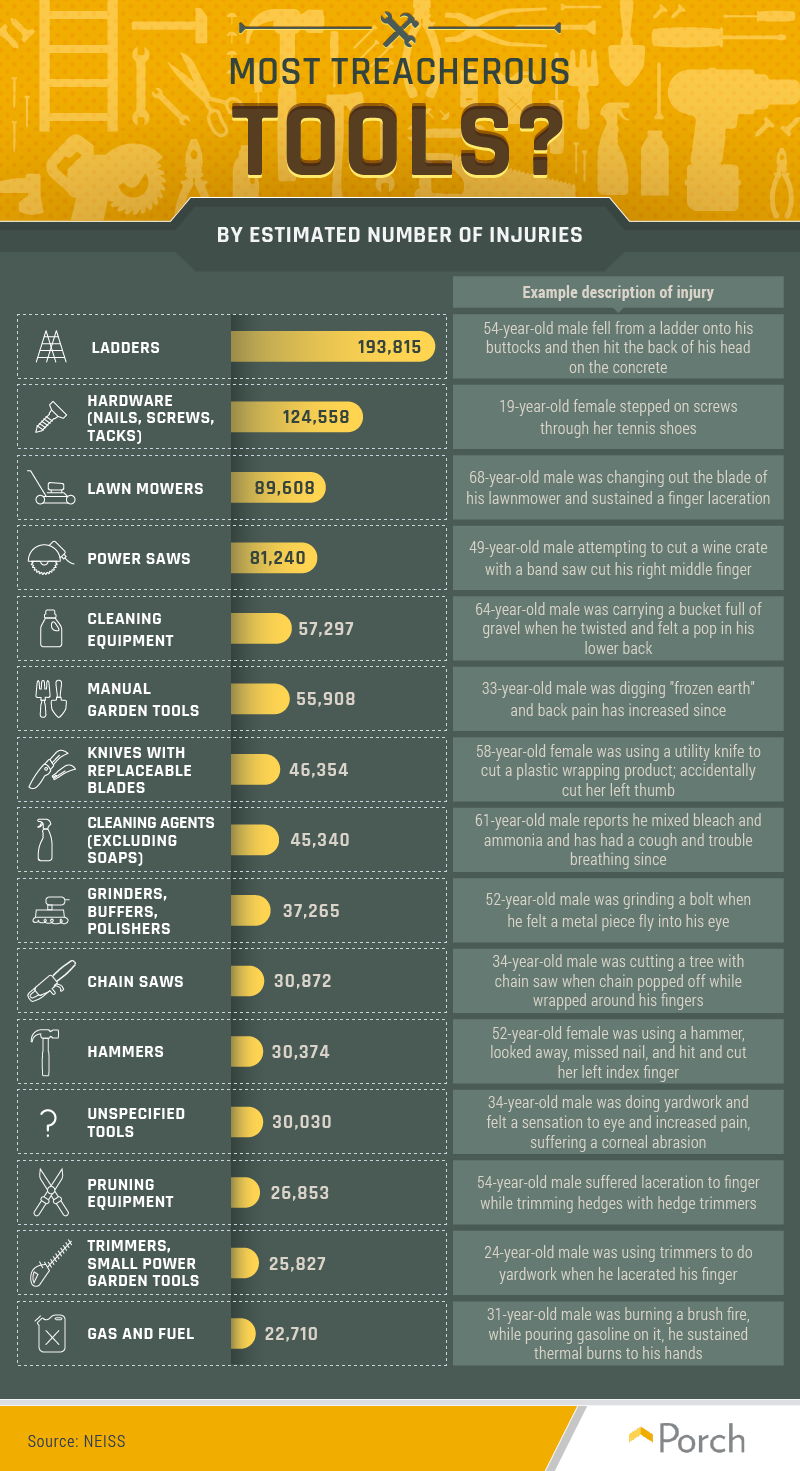 The tool responsible for the greatest number of injuries was neither sharp nor automated: Ladders were involved in no fewer than 193,815 ER visits in 2017. Indeed, ladder falls often prove deadly, with approximately 300 people killed in such accidents each year. Small, pointed objects also caused a stunning number of injuries, with nails, screws, or tacks accounting for over 124,000 ER visits. If left lying around, these items can cause injury long after the home improvement project is complete. We found several instances of individuals stepping on them without shoes. Heavier machinery also wounded thousands, with nearly 90,000 falling victim to lawn mowers, and over 81,000 suffering power saw injuries. More surprisingly, however, was that cleaning agents caused more than 45,000 ER visits—more than hammers or chain saws. This finding resonates with recent research suggesting regular exposure to cleaning products can cause lung decline comparable to the effects of smoking. In fact, we uncovered a report of a man who experienced respiratory troubles immediately after mixing cleaning products, a process that medical experts warn can be deadly in some cases. 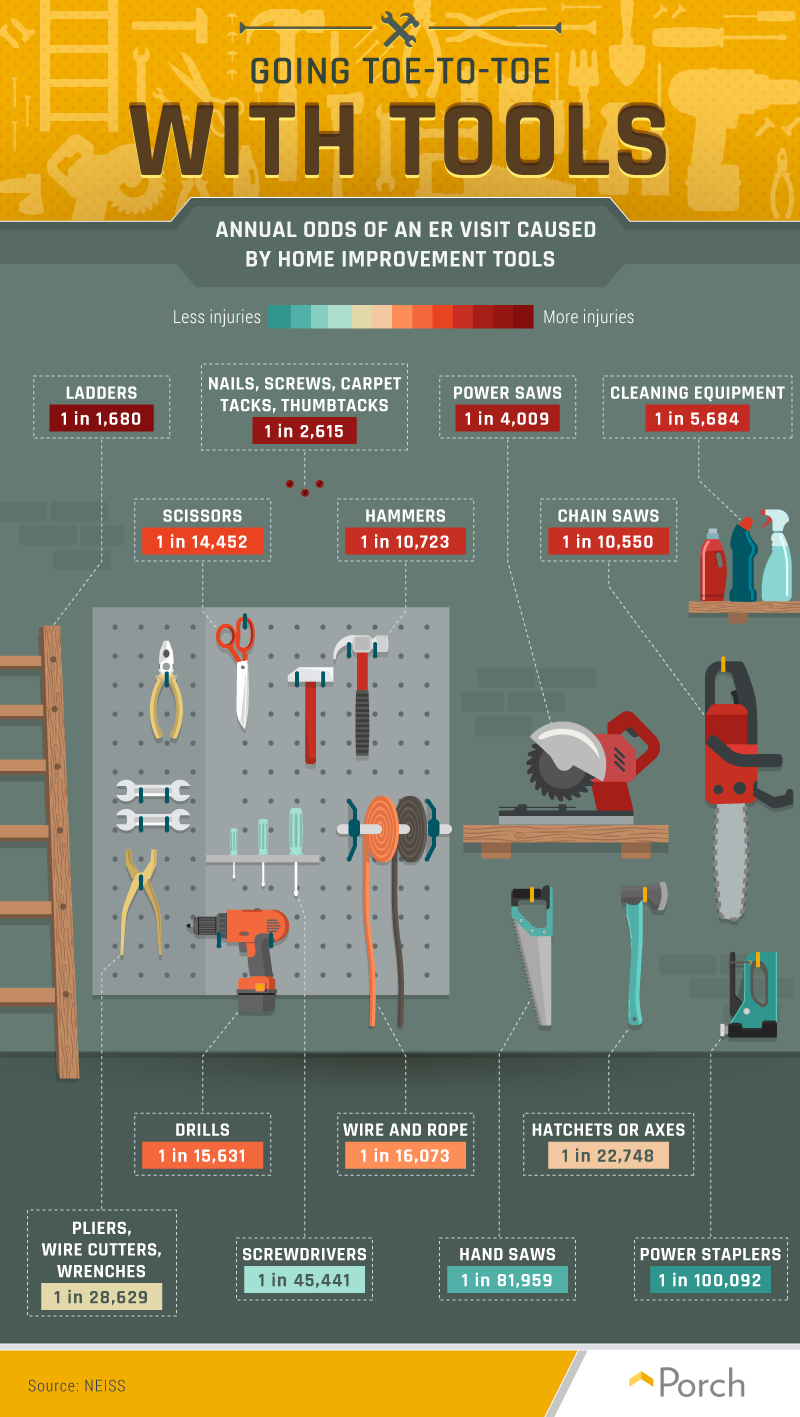 While these injury rates may seem startlingly high, your own odds of getting seriously hurt using a home improvement tool are relatively limited. In each calendar year, for example, one’s chances of visiting the ER as a result of a ladder-related injury are 1 in 1,680. Of course, these figures probably reflect how frequently these tools are used, rather than their inherent potential for injury. While the chances of injury by a power stapler were just 1 in 100,092, they’re certainly capable of causing serious harm. Moreover, these odds include those who avoid home improvement projects entirely—a choice many American homeowners make. Among those who use power saws frequently, the annual chances of injury are likely much higher than 1 in 4,009. Plus, one’s age and experience might substantially elevate the odds of getting injured. A recent study found millennials were particularly likely to land in the ER as a result of a DIY project, surpassing baby boomers in total injuries and wounds requiring stitches. 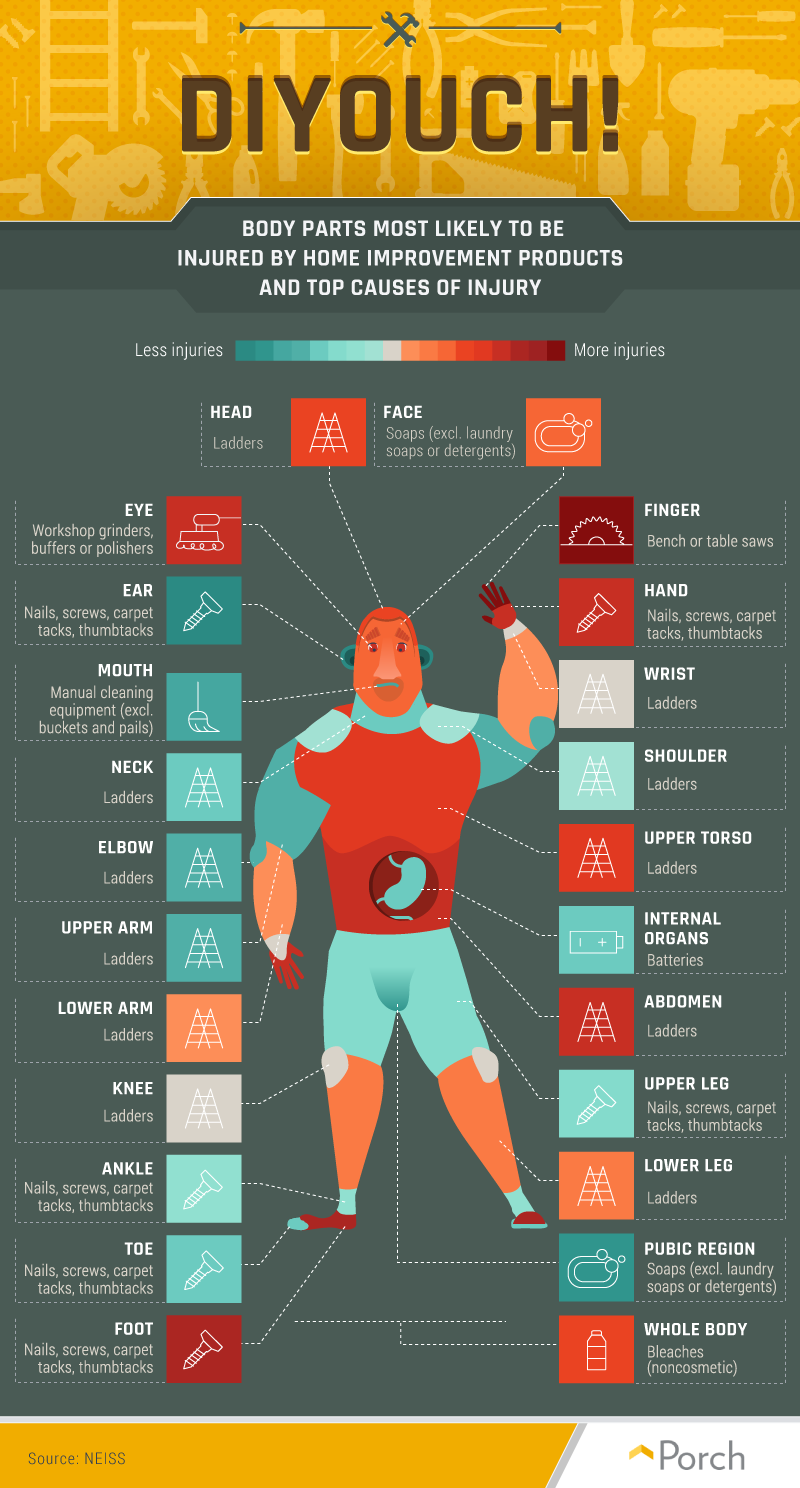 When it comes to home improvement, our digits are in the greatest danger. Fingers accounted for the greatest percentage of injuries and were the most likely to be caused by bench or table saws. Feet and hands accounted for a significant number of injuries primarily because of nails, screws, or tacks. Eyes were also commonly afflicted, often as a result of stray materials sent flying during the buffing and grinding processes. The Occupational Safety and Health Administration requires professionals to wear protective lenses when using these machines—and our data suggest homeowners should do the same. A number of regions of the body, including the head and torso, were the most likely to be hurt in ladder falls—a sudden drop from a significant height can cause a wide array of injuries simultaneously. In other cases, however, the top causes of harm were more surprising. Injuries to the face and pubic region often resulted from soaps poorly suited to those sensitive areas. Mouth injuries most often resulted from manual cleaning equipment. In this area, a wayward broom handle could really wreak havoc.

Safety and the sexes 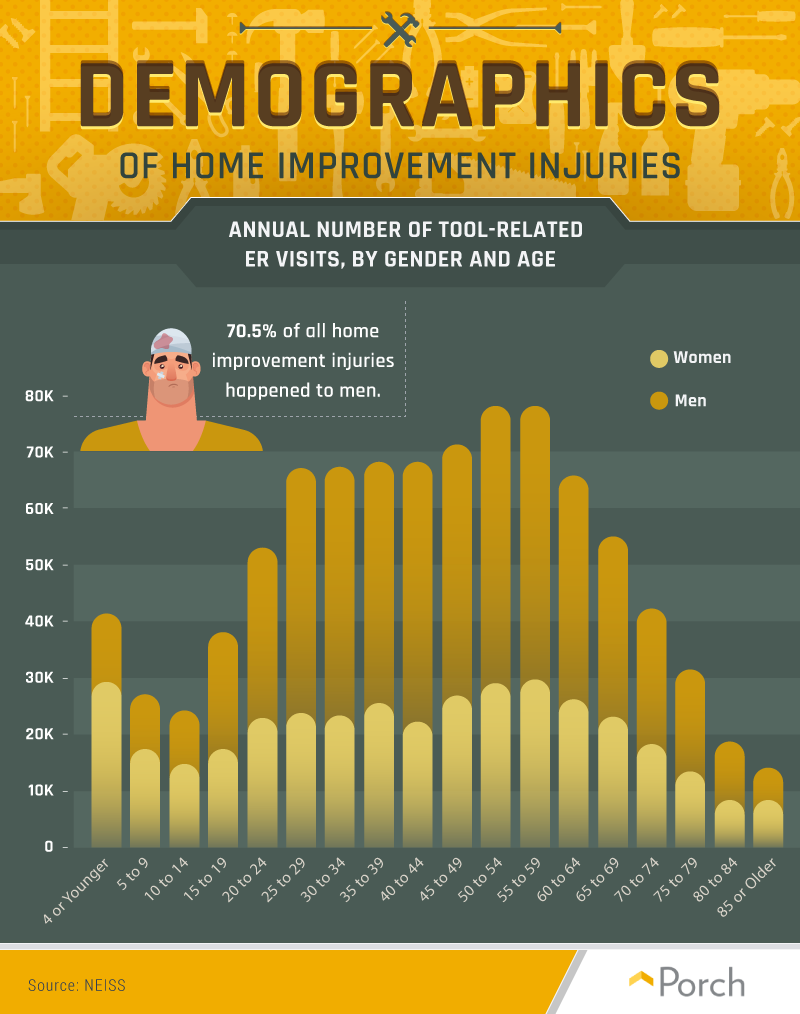 When we considered the distribution of home improvement injuries by age and gender, men were far more likely to visit the ER as a result of DIY efforts. In fact, men sustained 7 in 10 home improvement injuries, a ratio that remained largely consistent across the age groups. This disparity could relate to each gender’s confidence regarding home improvement projects: Men are more likely to regard themselves as handy around the house. Accordingly, they may attempt projects more often—including some that put them in harm’s way. DIYers between 50 and 60 years old sustained the greatest number of injuries overall, but ER visits were less common past that age range. Because common injuries, such as falls, can prove deadly for the elderly, many wisely avoid home improvement projects entirely. Emergency room visits were relatively consistent between ages 25 and 50, suggesting millennials and Gen Xers sustain home improvement injuries in equal numbers. Troublingly, over 40,000 injuries occurred among Americans under five, ostensibly because their parents left dangerous tools and materials around the house.

Home repair injuries peaked in the summer months, with 136,100 in June and 137,400 in July. This trend reflects the timing of various household tasks: From painting the house’s exterior to performing yardwork, homeowners are more likely to tackle a number of projects in warm weather. In January, conversely, fewer than 80,000 ER visits resulted from home improvement projects. Apparently, relatively few people get hurt attempting DIY-centric New Year’s resolutions. Home improvement injuries occurred most often on Saturdays, probably because people attempt major tasks around the house once the workweek ends. But in a surprising finding, Monday ranked second for DIY injuries overall, rather than Sunday. Perhaps this statistic relates to the timing of national holidays: Memorial Day, Labor Day, and Columbus Day all fall on Mondays. Perhaps homeowners plan to tackle DIY projects on these days off—and end up at the hospital instead.

Our data indicate that DIY optimism can often result in unfortunate accidents, with hundreds of thousands of homeowners heading to emergency rooms each year. And while power tools may seem most overtly threatening, injuries frequently stem from exceedingly common objects, such as nails or cleaning products. These findings suggest a simple but essential conclusion: No matter how modest your home improvement project may appear, exercise caution and focus at every stage. From preparing your workspace to cleaning up after your task is complete, your diligence will help avert danger. Of course, you should never attempt a project that makes you feel unsafe. If you need a repair or upgrade that’s beyond your expertise, hiring a pro might be surprisingly affordable. Let Porch help you find and hire the perfect contractor in your area. With our unparalleled network of professionals for everything from TV mounting to roofing, you’ll never have to DIY if you don’t want to. That means unbelievable remodeling results for you and your family—and no injuries along the way. Still want to do it yourself? Use our cost calculators to help understand what you need to do.

The data shown above were compiled using the U.S. Consumer Product Safety Commission’s National Electronic Injury Surveillance System’s (NEISS) 2017 data. First, we identified any tools that would be used for DIY or handyman projects in the home and isolated ER visits that related only to those products. Using weighted values given by the NEISS, we estimated the national number of injuries per product, grouping wherever applicable. Because the U.S. Consumer Product Safety Commission compiled the data through a sampling of hospitals, and figures are estimated, some numbers may be inexact. Accidents may have also been categorized using products that were not the primary cause of harm (for instance, if someone slipped on grease, it could have had two products listed, floor and grease), so some injuries may have more than one proximate cause of injury.

If this content piques your interest, please help us spread it across the web! You’re welcome to use our images and information for noncommercial purposes, so long as you include a link back to this page to credit our team. If you skip out on attribution, you’ll hurt our feelings—and that’s an injury you can easily avoid.