For the roughly 44 million Americans rocking a side hustle outside of their standard office hours, bankƒing a few extra dollars every month isn’t just a nicety—sometimes it’s a necessity for getting by. But if you’ve got skills you’ve been dying to put to good use—everything from writing and editing to data entry or tutoring—freelancing can be among the most lucrative side job success stories. It might even just be fun to daydream about the perks of being a full-time freelancer instead of punching in and out five days a week at your “real” job. Giving up the commute, working in your pajamas, setting your own schedule, and being your own boss are just a few of the commonly touted benefits of taking what might start out as a side gig and become a primary source of income. But is the grass truly greener on the other side? To uncover the truth behind some of the most common myths and perceptions of full-time freelance work compared to office life, we surveyed 955 people—485 working freelance jobs and 470 working in a more traditional office environment. Thinking about making the switch for yourself? Read on to discover who’s happier, who’s making more money, and how many of your co-workers might take the plunge next.

Whether it’s the stress of looming deadlines or the impact of long hours on your health and home life, there are plenty of reasons why you might go to bed on Sunday dreading the workweek ahead. Office life isn’t just sometimes a drag; in some cases, it can actually be bad for you. Somewhere between a distaste for their current employment or the allure of something much better, 69 percent of surveyed office employees confessed to considering going freelance. And they could be on to something where happiness is concerned. As our study found, full-time freelancers saw a seven percentage point increase in job satisfaction. Of course, happiness isn’t the only consideration when it comes to major career choices. Full-time freelancers might be happier with their work status, but they could be making a sacrifice in dollars and cents to achieve that bliss. Compared to office employees, full-time freelancers were much less likely to earn $50,000 or more annually from their work. In contrast to the more than 1 in 10 office workers earning between $75,000 and $99,999 or $100,000 or more, less than 4 percent of full-time freelancers managed to pull in six-figure incomes. Roughly 20 percent of full-time freelancers reported annual incomes less than $15,000 which doesn’t leave very much for a home office remodel. 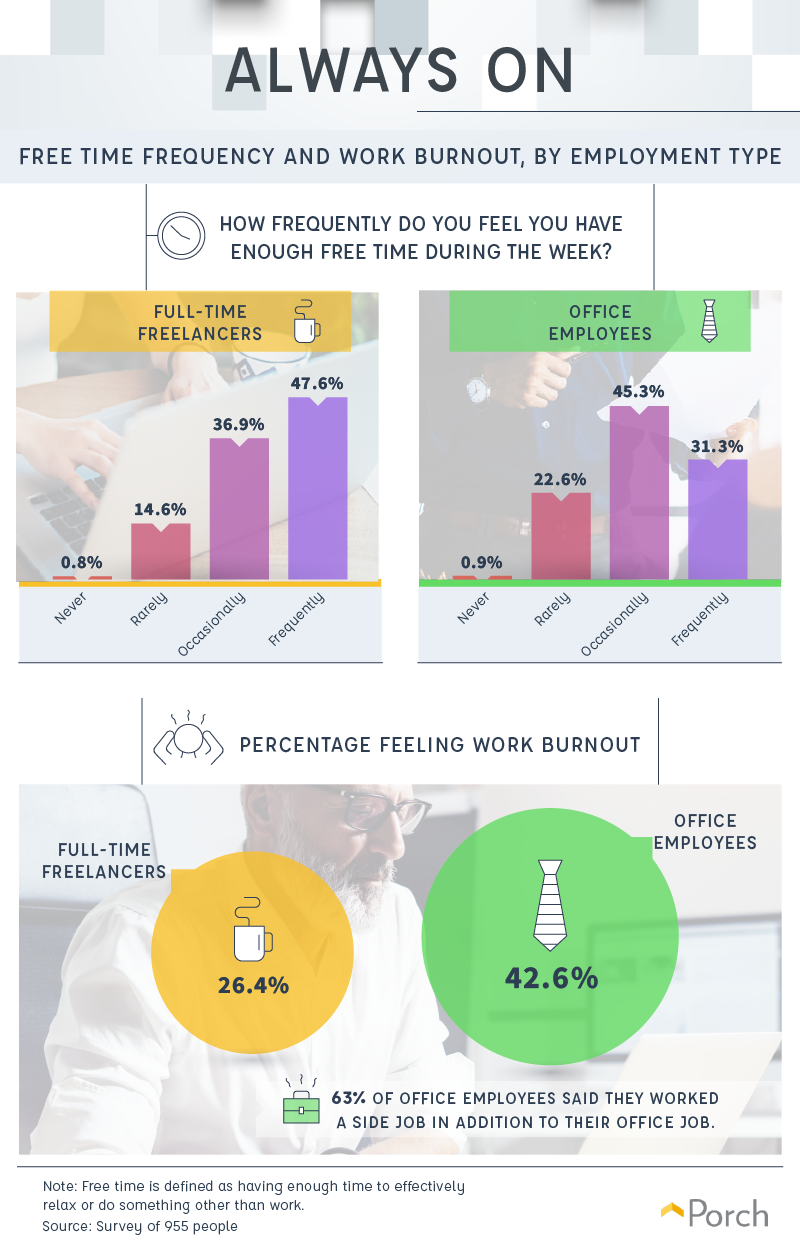 Our findings revealed time off could be one of the undeniable perks of full-time freelancing over office life. Compared to the roughly 31 percent of office employees who said they frequently had free time, closer to half of freelancers said the same. That shift in work-life balance could be a part of what helps freelancers feel less burnout from their jobs. A 61 percent change, only about 26 percent of full-time freelancers felt fatigued by their daily assignments, while nearly 43 percent of office employees reported feeling burnout. According to one 2017 study, fewer than 1 in 4 employees utilize all of their available time off from work. Even though experts say taking time off and traveling is good for both health and productivity, the average American only uses about half of his or her total vacation time. Even the ones who do clock out to get away are more likely to be guilty of bringing their work along for the ride instead of leaving it at the office. So why go into work when you have paid time off waiting to be taken advantage of? For a majority of people, the answer is simple: fear. Fear of falling behind or fear of being replaced—this heightened anxiety leads people to consider cashing in their vacation hours or letting them expire instead.

All that glitters isn’t gold 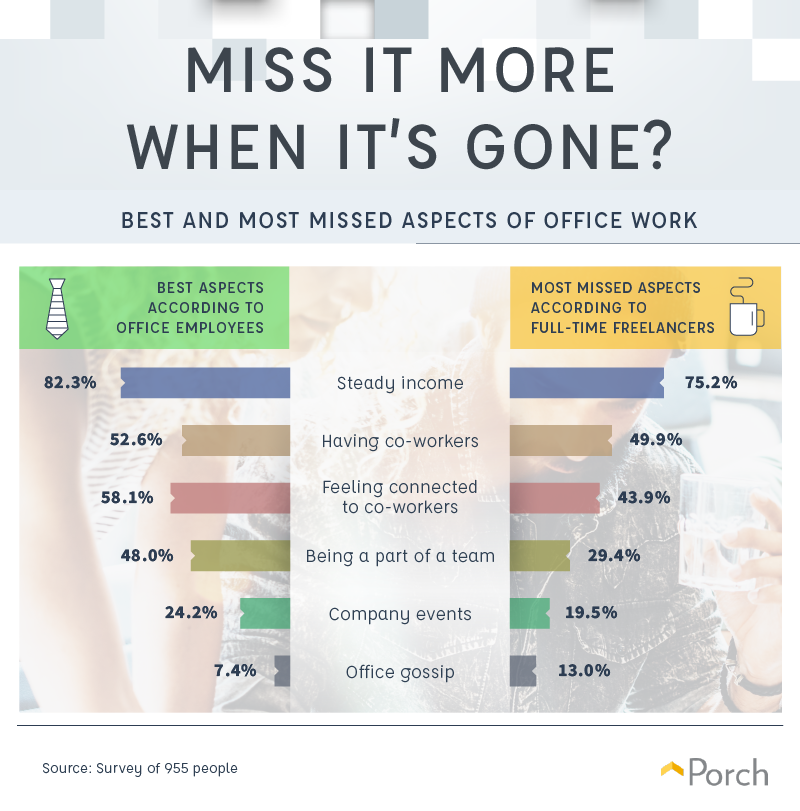 No matter how you slice it, certain elements of being a full-time freelancer are bound to seem enticing from the outside. Having a certain level of flexibility and independence over when you work, where you get the job done, and whom you take on as a client has its privileges over a more rigid office environment. But what about the perks of office life that you might miss once they’re gone? Over 82 percent of office employees enjoyed the singular aspect of their professional lives that 75 percent of freelancers missed having: a steady income. While there’s always the potential to earn more as a freelancer, it isn’t guaranteed, and you might have to put in some extra legwork at the end of the month to track down your invoices when you aren’t on the payroll. Full-time freelancers also confessed to missing having co-workers with whom to share their days (49.9 percent), feeling connected to the people they worked with (43.9 percent), and being part of a team (29.4 percent). If the isolation really bugs you or starts to affect the quality of your work, analysts say that could be one of the most important signs that freelance work might not be for you. 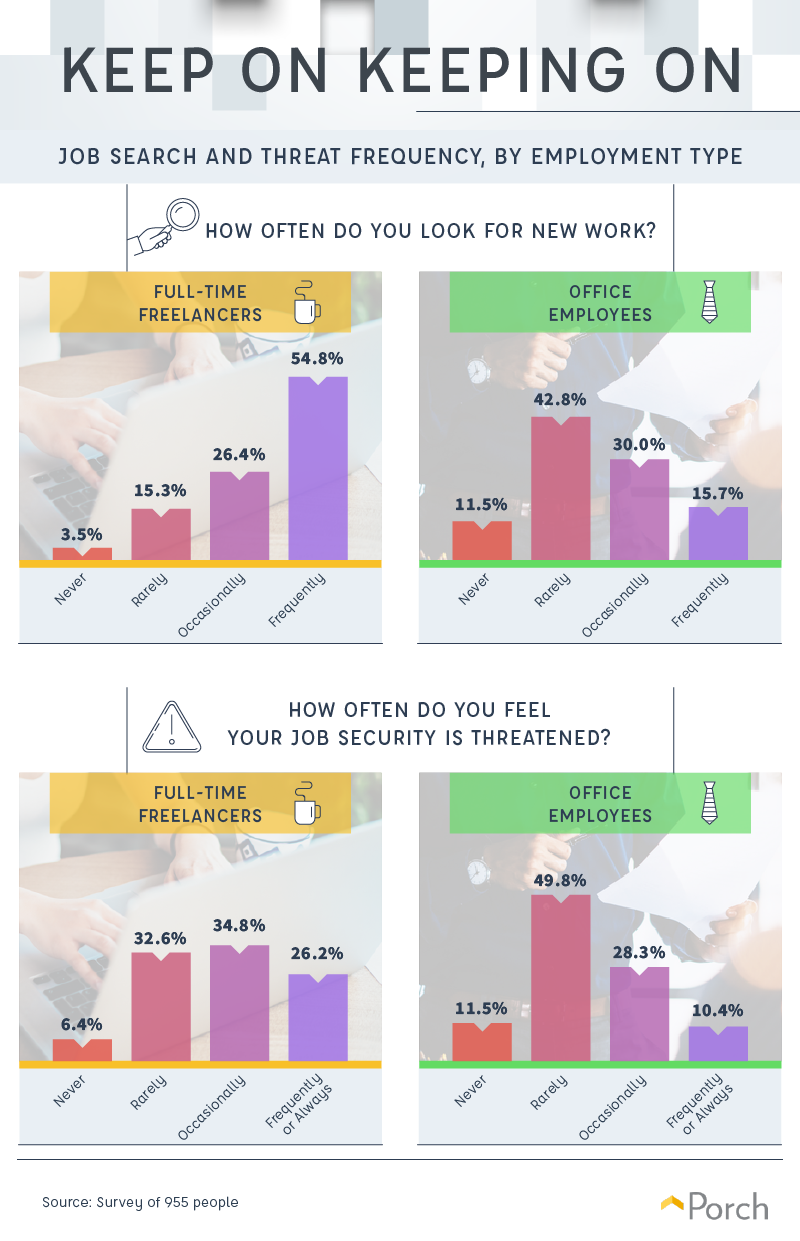 While you might still find yourself of the job hunt as an office employee, people with more conventional professions typically enjoy a certain level of comfort the average freelancer can’t. Compared to 1 in 10 office workers who always felt like their jobs were on the line, more than 1 in 4 full-time freelancers lived with the concern they might lose their work at any given time. And while nearly 55 percent of full-time freelancers were frequently looking for new jobs, less than 16 percent of office employees consistently looked for work. Office employees more commonly either only rarely (42.8 percent) or occasionally (30 percent) felt the need to pursue new opportunities for employment. 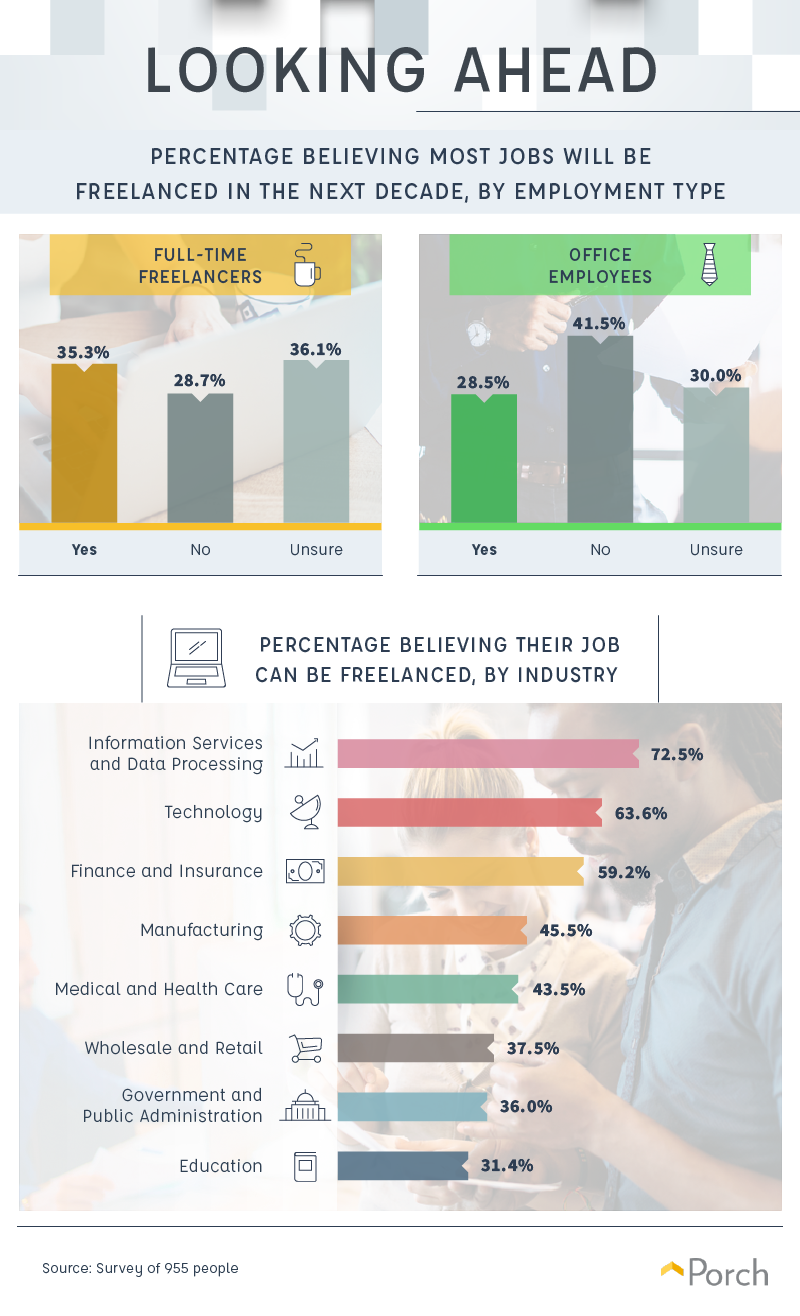 In today’s digital climate, you don’t have to commit to full-time freelancing to get some of the benefits. The widespread availability of mobile devices and powerful video conferencing technology means companies that previously brought all of their employees into the office on a daily basis can now consider partial or even total telecommuting work. These trends may continue evolving, too. Nearly 29 percent of people working in an office environment believed most jobs would transition to freelance work in the future. Our analysis found employees in information services (72.5 percent), technology (63.6 percent), such as freelance programmers, finance and insurance (59.2 percent), and manufacturing (45.5 percent) largely believed their jobs could be done as freelance (rather than permanent) positions. Learn some freelance statistics for 2021 here.

Things you shouldn’t have to worry about

If you work from home in your pajamas or clock in and out for the traditional 9 to 5, it’s entirely possible the grass could look greener on the other side. The truth probably lies somewhere in the middle. While full-time freelancers reported having more free time and feeling less burnt out by their jobs, they also generally made less money and had more stress about securing a regular income. And as lonely as being a full-time freelancer might be, certain employees surveyed felt their jobs could transform from permanent employment to full-on freelance work. Whether you work from home, creating positive energy in your house is an important element to creating the kind of good vibes that radiate to work and back with you. At Porch, we help you tackle every item on your to-do list so you don’t have to. A simplified approach to home improvement, our Porch Home Assistant is available 24/7 to connect you with our Porch Services pros in your area. No job is too big or small – from TV mounting to drywall repair we’ve got your back. From helping you assemble new furniture or hanging artwork to landscaping and appliance installation, Porch has your back. Visit us to learn more.

To gather the data presented in the above study, a survey was conducted using Amazon’s Mechanical Turk Service. Respondents were asked if they worked in an office full time or worked as a full-time freelancer, and all others did not qualify for the survey. Of the 955 respondents, 470 were full-time office employees, and 485 were full-time freelancers. 459 respondents identified as female, 493 identified as male, and 3 chose to identify as neither. 99 respondents were Baby Boomers, 273 were from Generation X, 566 were Millennials, and 17 from generations outside those. For the data regarding what freelancers miss about working in an office, only current freelancers who have worked in an office before were taken into account. All responses gathered are based on self-reporting, and there are many issues that can be found within self-reported data, such as telescoping and exaggeration. To make sure respondents were paying attention and to ensure the most accurate data possible was obtained, an attention-check question was included.

Are your readers interested in the digital nomad movement? We welcome the sharing of this study and all related images for any noncommercial reuse. Please include a link back to this page so that they can see the results of our study in their entirety and weigh the pros and cons for themselves.