Whether you’re dating, engaged, or married, moving in with a significant other is supposed to be an exhilarating experience. You get to start planning for new furniture, decorating, and building your home together. With all of that, then, there’s probably one thing you aren’t thinking about: breaking up and deciding who gets what after the split.

Breaking up with a live-in partner can be one of the most stressful experiences couples face. Caught somewhere between the emotional and logistical burden, knowing what to do, when to do it, and the potential of cohabitating afterward can be absolutely exhausting.

Want to know what you should expect if you ever decide to pull the plug on a relationship after you’ve moved in? We surveyed over 1,000 people either living with their partners currently, or who have lived with them at one point, about how they would approach dividing their possessions. We asked them about splitting up everything from the house to their shared bank account and even their pets. To see what they had to say and how brutal some breakups can get, keep reading. 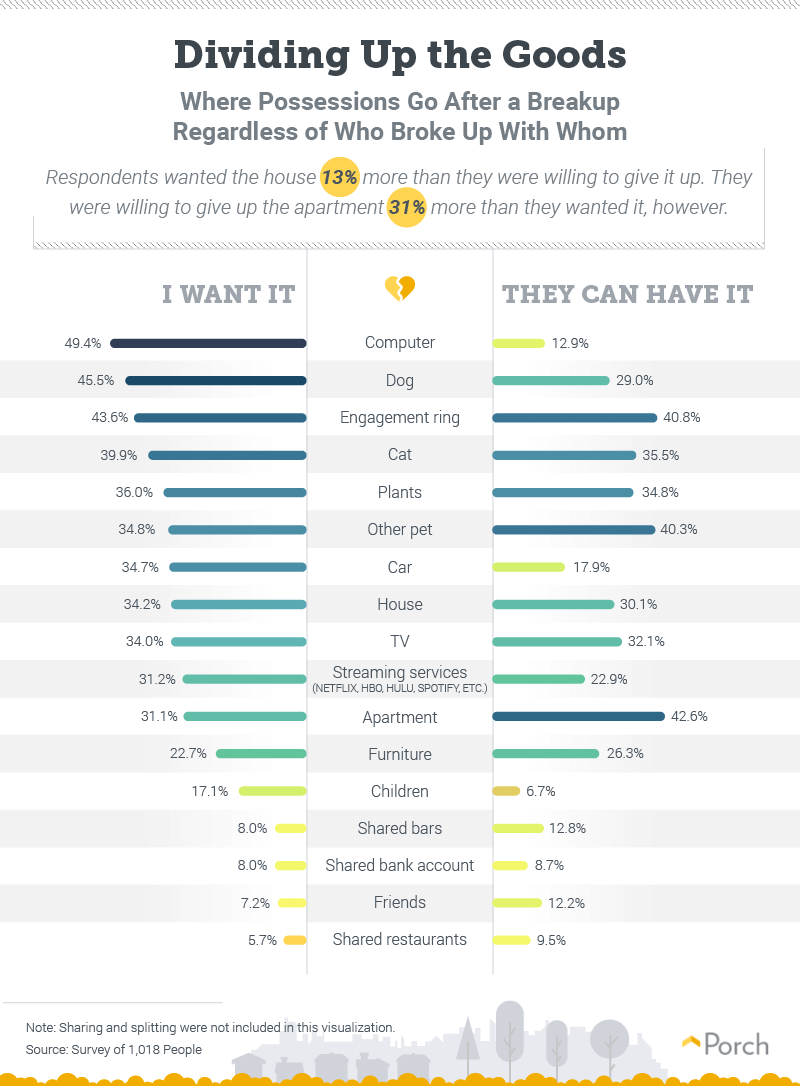 When you’re in love and living with your significant other, the “what’s yours is mine, and what’s mine is yours” philosophy might be in full effect. You share the bills, a bed, and maybe even a furry companion after all. Unfortunately, that peaceful symbiosis might not last for long after you decide to call it quits.

When asked about splitting some of their most important possessions, a majority of people believed they were entitled to keep those things for themselves. While every situation is different, these particular items might cause the most consternation when it comes to breaking up. Nearly half said they would keep their computer (over 49 percent) and dog (nearly 46 percent), and nearly as many planned to hold on to the engagement ring and cat too.

Deciding who gets to stay in the home and who should leave can be tricky, and while over 34 percent of people planned to keep the house after separating, nearly 43 percent said they’d let their partner keep the home in the case of an apartment.

Things couples were more likely to share or split rather than try to divide and keep for themselves? Their shared bank account, friends, and restaurants. You might not be in love anymore, but at least most people won’t make their friends pick sides after a split. 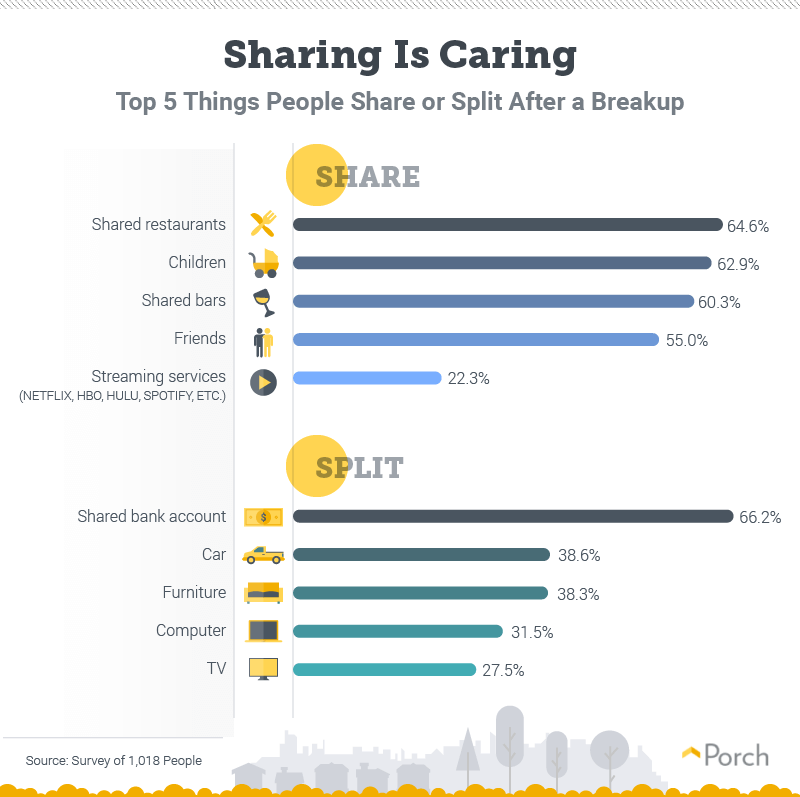 When it comes to deciding who gets to keep what, respondents realized some items were better left shared or split regardless of the circumstance.

Of all the things participants were willing to share after breaking up, favorite restaurants made it to the top of their list (nearly 65 percent) followed by children (almost 63 percent) and bars (just over 60 percent). Another 55 percent admitted they wouldn’t ask their friends to pick sides after the split either. After all, there are no custody hearings for your game night crew, and both partners might appreciate having a friendly face to turn to while they work out the details of their breakup.

In some cases, couples also chose to split their assets and walk away with a fair share rather than the entire value. Over 66 percent split their shared bank account, a process that’s sometimes easier said than done. Depending on the situation, getting a third party involved can help keep things civil, especially if there’s mutual debt involved. More than 38 percent were willing to split the furniture or a vehicle, and more than 1 in 4 split the computer and TV.

Breaking up can come with its own fair share of uncomfortable moments and awkward conversations, but deciding who gets to keep what can be a more straightforward process than you think.

Nearly 47 percent of people kept the division of property simple: The person who owned a particular item before the relationship (or purchased it during) got to keep it in the end. Of course, that train of thought might not hold up for every item you’re trying to decide on. More than 1 in 3 said they would discuss who gets what, and almost 17 percent used some other method (including a potential mediator). 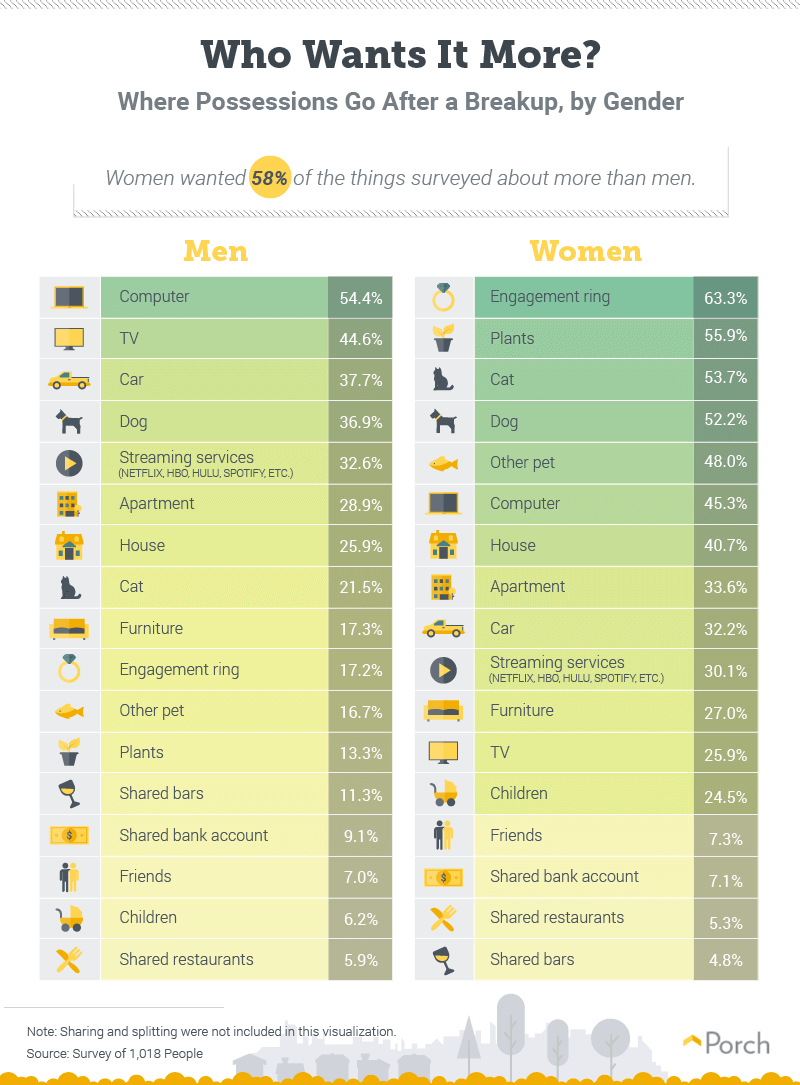 When it comes to dividing up assets at the end of a relationship—men and women had very different ideas about what they really wanted to keep.

People confessed technology was an important consideration in splitting up with their live-in partners, but men were more interested in getting to keep their tech toys than women. More than anything else, over half of men wanted to keep the computer, and nearly 45 percent wanted the TV. While roughly 45 percent of women also attempted to lay claim to the computer after a breakup, only around 1 in 4 held onto the TV. In both cases, either partner might only be taking back the tech they brought with them into the relationship, although women were typically less interested than men in these possessions.

For women, the engagement ring, plants, cats, and dogs were seen as more valuable, and the things they wanted most before parting ways. Debating who gets to keep the ficus or the fig tree might seem trivial on the surface, but research shows indoor plants can help boost mood, enhance concentration, and even promote healing—all valuable traits in the middle of a rough breakup.

And if you think debating who gets the house or kids is the only thing couples argue about in a split, think again. Deciding who gets to keep the rights to streaming services might create serious strife for some people. Nearly 33 percent of men and just over 30 percent of women wanted to keep the login credentials for accounts like Netflix, Hulu, or Spotify than split or share them. 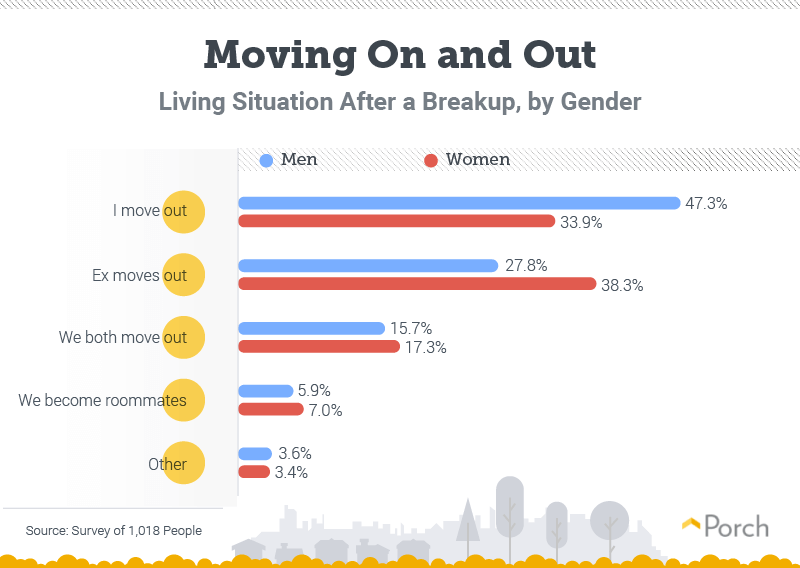 There’s no denying splitting the material possessions after a relationship ends is an important part of moving on, but for couples living together, moving out can sometimes be the hardest part.

Depending on your living situation or whether you have a lease on your current residency, deciding who should leave or stay isn’t always easy. In most cases, people believed men should be the ones to leave after a breakup. In fact, more than 47 percent of men said they would move out rather than ask their ex to do it.

Of course, one partner leaving and one partner staying isn’t the only option. Over 17 percent of men and nearly 16 percent of women said they would both move out, while another 7 percent of men and almost 6 percent of women would live together as roommates instead. If you can’t afford to move out on your own right away, continuing to live under the same roof might be your best bet. If you find yourself in this rare set of circumstances, experts suggest remaining as cordial as possible, accepting the reality of silence, and finding your own private space to retreat to within your dwelling when necessary. 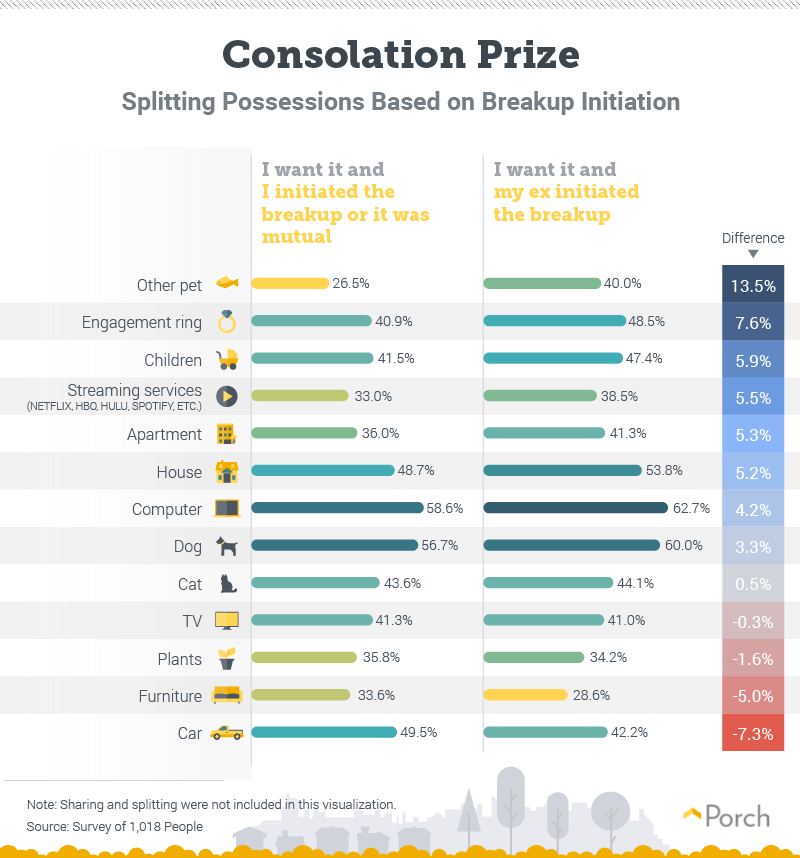 Even though you shouldn’t feel guilty, breaking up with someone can leave behind a strain of negative emotions. And while some breakups are mutual, if you happen to be on the receiving end of an unexpected split, it might at least make you feel better to know there are consolation prizes (of sorts) after getting dumped.

More often than not, the person being broken up with was more likely to keep possession of certain items than the person initiating the split. When it came to pets, the engagement ring, and the apartment, holding on to these sometimes pricey possessions was likelier for the person being left behind.

While you shouldn’t expect being broken up with will help you make a case for keeping your shared furniture or the car, you might still walk away with more money from the shared bank account or the rights to your favorite eatery instead.

Making Your House a Home

Breaking up is hard to do. More than just the emotional rollercoaster you might find yourself on (whether you initiated the breakup) dealing with the logistics of who gets what, or what to do with your shared home, can make the experience even more stressful on both parties. As our survey showed, most people felt entitled to keep a majority of their shared possessions, which can make dividing those assets a complicated procedure. Still, in most cases, men were more willing to move out, leaving their ex with the home, and the person initiating the breakup was more likely to let their ex keep things like the engagement ring or pets.

No matter if you’re just moving in together, moving out, or looking for a place of your own, your house should be an extension of who you are. Let us help you transform that space into a home that makes you feel comfortable and safe. Whether you need help remodeling a room, repairing your exterior, or just hanging art, Porch has a professional for that. As your free Home Assistant, we’ll be with you every step of the way to tackle whatever is up next on your to-do list. With our network of Porch Pros, Porch is here when you need us. Ready to start tackling those home improvement projects? Visit us to get started.

We surveyed 1,018 people who have, at one point, cohabitated with a partner. Eighty percent of respondents were currently in a relationship, while 20 percent were surveyed about their last relationship where they lived with their partner. Respondents ranged in age from 18 to 74, with an average age of 36.

The data we are presenting rely on self-reporting. There are many issues with self-reported data. These issues include but are not limited to: selective memory, telescoping, attribution, and exaggeration.

No one said breaking up was easy, but it might help to know what to expect. Feel free to share the results of this study with your readers for any noncommercial use. We won’t ask for much; just ensure a link back to this page, so our contributors get credit for their work, and your readers can see our research in its entirety.